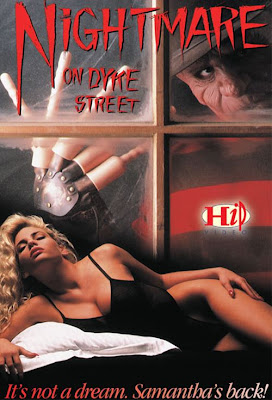 Possibly the worst porno parody I have ever seen and that's a pretty hard goal to achieve. This thing makes absolutely no sense at all. Dyke Street is obviously supposed to be a spoof on The Nightmare On Elm Street movies and yes we do have a Freddy Kruger character who shows up in the dreams of our female lead Samantha. We know when we are in dream land not only because Freddy appears but because the set is suddenly covered in Christmas tree tinsel. Why the film makers thought tinsel was a good effect is beyond me but the cast and sets are covered in it. The tinsel is so obviously annoying to the actors as the pull the shiny, festive, slivers away from their genitals. This stuff is getting in their vagina's for Christ sake. Next the film will cut away and the tinsel which was just removed will be back again as if the director was screaming "more tinsel! Don't touch the tinsel!".

Aside from the obnoxious Christmas decorations, Freddy doesn't really do much and for some reason he wears a long black wig. I don't know if this is supposed to mean that Freddy is a lesbian because there is no fucking dialogue in the movie other then the occasional moan and groan. Maybe he is supposed to be a woman, after all the movie is called A Nightmare On "Dyke" Street. Lesbian or not Freddy sports anal beads instead of knives for fingers but never puts them to use. Instead he/she just rubs them on women's ass and clits. Who the fuck thought this thing up? Three directors are credited for this thing which is even more embarrassing. One of them is to blame for Halloweenie which I am yet to see but Dyke Street is really pulling me in the opposite direction.

As if this isn't all weird enough we also have a bit of racism thrown into a scene where a bunch of white students make fun of their black teacher and shout out "Hammer time" constantly. They also draw a picture of a man with a huge Afro on the blackboard with an arrow going to his penis. Captioned underneath it says "Hammer time". Next the black teacher strips down to nothing but his belt and screws one of his students as Freddy watches. We also have a bunch of audio taken from Full Metal Jacket which is mixed into the shitty techno soundtrack.

It is a hell of a task to make it through A Nightmare On Dyke Street in one sitting and I strongly recommend staying far away from this grabastic piece of amphibian shit.
Posted by Paul Awful at 2:10 PM