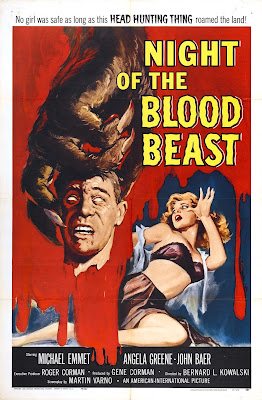 Written by Roger Corman's brother Gene Corman and directed by the man who would give us Attack Of The Giant Leeches in the following year, Night Of The Blood Beast would be double billed with the superior Roger Corman film She Gods Of Shark Reef.

I generally love these campy 50's monster movies but Night Of The Blood Beast has to be one of the worst monster flicks I have ever seen. It starts off with an incredibly cheesy spaceship crash-landing on planet Earth. The astronaut is dead of course and some really uninteresting scientists bring him back for a autopsy. Of course we don't get to see all the bloody stuff, like the corpse being cut open and I didn't really expect it from a 50's flick but it would be nice if we got something other then boring chit-chat and drawn out talky scenes from dull characters. The movie only runs at 62 minutes but due to these long winded talking scenes it seems to go on forever.

We eventually get a monster towards the end of the movie and that's of course where it gets (slightly) entertaining. The monster looks like pure hell and not in a good way. It runs around with hapless women and gives a speech to the (stupid & violent) species of Earth people in a scene that is oddly reminiscent of Plan 9 From Outer Space. A man commits suicide with a knife to his own guts but due to the fact that he is not Japanese he needs a little help from a grenade. This scene and the silly monster suit is really the only thing worth while in Night Of The Blood Beast. Other then that its a total piece of crap that needs to be avoided.

Beware : this thing was also released as Creature From Galaxy 27 and Monster From Galaxy 27 in the vhs days. So be sure to stay away from those titles as well. No wonder nobody ever talks about Roger's brother. 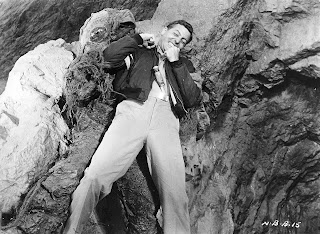