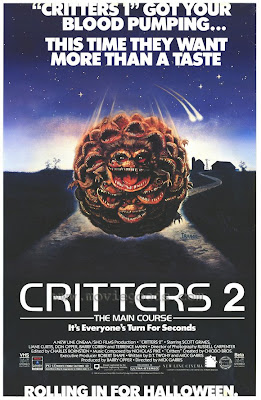 Mick Garris the director of The Stand and Psycho 4 : The Beginning, directs the sequel for Critters. This time around there is a lot more murder on display. While the first film had a {PG13} rating and was very tame almost in a Gremlins kinda way, the sequel's tagline boasts The Main Course... It's everyone's turn for seconds and sported a {R} rating.

This means more death and more gore. We also get a bare breasted bimbo this time around in what has to be one of the most gratuitous scenes of boobage in cinematic history next to Zombie Death House.

This time around the hungry aliens eat humans, cows, dogs, nerds and bullies. Critters two offers up another dead cop and they even get the bounty hunter from the first film who can't chose a face. To bad they didn't get the glam bastard instead or at least Charlie the towns drunk. Charlie does come back for the second film and this time he is one of the bounty hunters and he pretty much saves the day in this one.

On the other hand aside from the increased gore and nudity they also added more comedy and sappy stuff into this one. We have a boring love story for a subplot going on with our red-head main character and there is also a little girl running around that we are supposed to think "Oh how cute". Of course this is not the fact and us monster-kids would much rather see them both being eaten up by the razor toothed hairballs from outer space. However we do get an awesome super-nerd who works at a fast food joint. His screen time is much appreciated and he has to be one of the most awkward actors of all time. Some of the other comedic treats that Critters 2 has to offer is a dead easterbunny, more foul mouthed Critters and a spaceship suicide bomber. Also the Criters all join together to make one giant flesh eating ball of terror.

Fans of the first film should definitely enjoy the sequel. More gore! Need I say more? 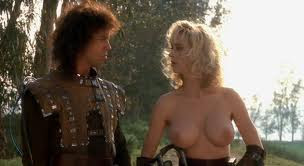