Davy Crockett And The River Pirates (1956) 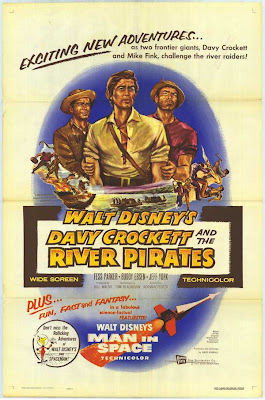 What we have here is probably the only decent film ever to come from Walt Disney. Davy Crockett And The River Pirates is the Technicolor sequel to Norman Foster's Davy Crockett : King Of The Wild Frontier. This time around Crockett and his partner Georgy has to race Mike Fink The King Of The River to New Orleans.

This movie is amazing for one reason and that is the character of Mike Fink and his crew of roughneck pirates. Mike Fink is a bragging, prick. He is totally full of himself and everything out of his mouth is hilarious. "I can out-run, out-jump, out-sing, out-swim, out-dance, out-shoot, out-eat, out-drink, Out-talk, out-cuss, out-fight anybody in the whole Mississippi and Ohio Rivers put together!" He beats the crap out of his own men and has the most obnoxious laugh. How can anybody not love this character. Davy Crockett on the other hand is exactly what you would expect out from a 50's movie legendary hero. He's a good-doer with high morals. Boring!
Its also amazing that this thing is a children's movie. We have excessive drinking, plenty of fist fights and violence. A war with native American Indians and plenty more of what is considered politically incorrect today.

Davy Crockett And The River Pirates is a childhood favorite of mine and it turns out the director is the grandfather of a personal friend of mine. I don't know what the odds of this is but it makes me like the film just a bit more. If you think you might want to see a man eat his hat "feather and all" you might want to check this one out. 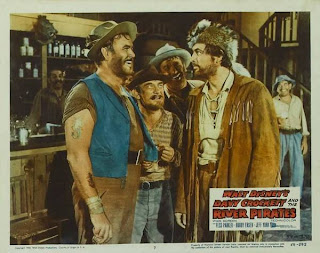 Email ThisBlogThis!Share to TwitterShare to FacebookShare to Pinterest
Labels: Davy Crockett And The River Pirates