The Monster That Challenged The World (1957) 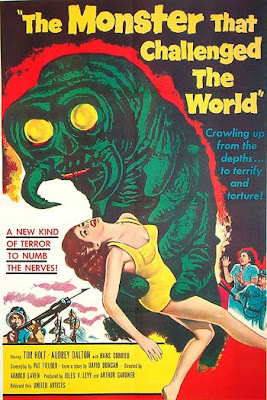 Another crazy monster flick from the 50's. This monster looks pretty good. It looks kind of like a giant Caterpillar with two big claspers on its jaws. Why they chose a giant Caterpillar-looking-thing to be a sea creature I'm not exactly sure but that's what we have here. 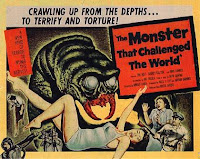 The monster first strikes at a couple of Navy boys. The first is drained of blood and the second one just drops dead of fright. (You gotta see the actors frightened face). The monster leaves some spermy-looking secretion behind. Naturally when the military finds the abandoned semen covered ship and two dead soldiers they declare war against the monster.

The title is a bit deceiving because its not really The Monster That Challenged The World, its really The Monsters. The first monster is killed off pretty quickly with a rowboat ore to the eye. The Army finds a giant egg in the bottom of the sea and bring it back for observation. Its not long before they learn that there is a bunch of these giant sea creatures.

We get some awesome stock footage showing close-ups on slugs and snails and how they eat. Its a very slimy scene and when viewed on a theater sized screen can almost make you squirm a bit.

We have multiple close-ups on dead bodies with eyes bulging from their sockets, A decapitated head, A severed arm and a whole bunch of dead rabbits.

A little girl botches up the whole operation and sets the last of the monsters loose upon the land. We also have a Blob homage thrown in with some fire-extinguisher-fu.

It can run a bit slow at times but the acting isn't terrible and the monster is a whole lot of fun to look at. Fans of this flick might also want to check out The Horror Of Party Beach. 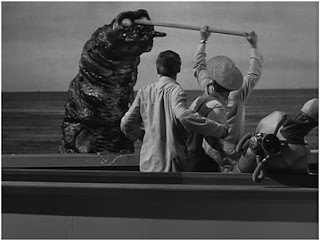 Email ThisBlogThis!Share to TwitterShare to FacebookShare to Pinterest
Labels: Monster Movies, Monster That Challenged The World