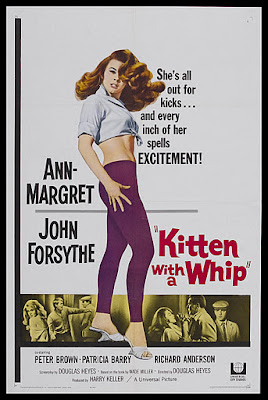 Why people love to bad-mouth this movie is beyond me. I personally really dig this movie. Its a home invasion flick with a sexy looking blond as the villain, violent beatniks and a stupid good-doer as the hapless victim. 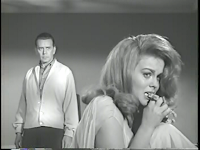 John Forsythe (Trouble With Harry) plays David Stratton, an aspiring politician who's life is about to take a dramatic change for the worse when he finds a young attractive blond (Ann-Margret) sleeping in his daughters bed. David does what any man with a brain would do and wakes her up for some questioning. David is taken in by the girls sob story of abuse and he decides to help her. First he buys her a pretty dress that shows off her finer aspects and then he takes her to the local bus stop where she can catch a ride out of town and start a new life. With the help of a news bulletin Mr. Stratton learns the truth about his new friend. She wasn't on the run from her abusive family at all. She is in fact an escaped juvenile who is wanted for stabbing a guard at the delinquent center. Its not long before David is being held captive in his home by the young tigress and two violent beatniks. 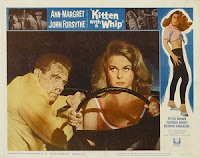 This is where Kitten With A Whip gets really good. The two beatniks take turns mentally and physically breaking David down. One of them is a vicious brute who gets a little slash-happy with a straight razor. The other is a sort of sophisti-cat who spills amazing dialogue that you can't help but love. "Those are the meanings of the meaningless, The exactitude's of the inexact. Man don't you dig the desire to not communicate?" I don't know about you but I can dig it and I love just about everything that comes out of this guys mouth.

The home invasion eventually takes to the road as the four characters get caught up in a game of cat and mouse and we are treated to a few fight scenes. A awesome moment where a guy is tangled in barbed wire and then run over by a car. A car crash (Complete with crash & burn) and a surprise ending.

For me Kitten With A Whip was a great watch and not necessarily in the exploitation sense either. Its not really very campy and while some of the characters maybe a bit gullible I think its a great movie with nice camera work and a few surprises that I really didn't see coming. 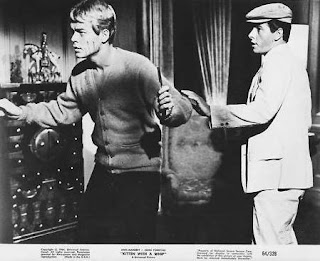