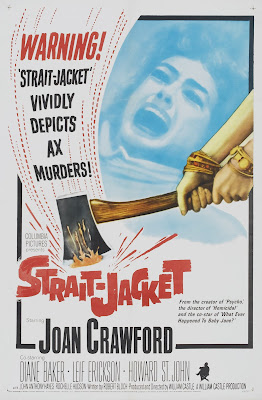 A bit of a let down as far as a William Castle flick goes. The story has it that Castle went to see What Ever Happened To Baby Jane 17 times and his dream was to make a movie with Robert Bloch (the man who wrote Hitchcock's Psycho) and Joan Crowford. Well the dream came true and the movie is called Straight Jacket.

Joan Crowford plays an axe wielding maniac who is released from an insane asylum after twenty years for the crime of hacking her husband and his lover to bits with a axe.

As the poster art boasts "Straight-Jacket vividly depicts ax murders". This is no lie. We get multiple decapitations (complete with cheesy severed heads-a-rollin) which seems to be William Castle's fascination since Homicidal (a Psycho ripoff) but the dismemberment isn't quite enough to save Straight Jacket from falling into the boring realm of uninteresting characters and a ending that is seen coming from miles away. 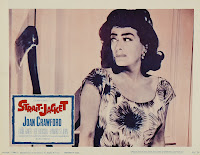 Straight Jacket also lacks a decent gimmick. William Castle figured that a big star like Joan Crowford was enough to sell his movie and that a gimmick was not necessary. Well guess what... We love William Castle and his silly gimmicks. We also love the fact that he makes B movies with B-grade actors. Throwing a Hollywood bag like Crowford into the mix just knocks the whole film of axis. She doesn't belong in this kind of film. I will admit that Crowford did a great job and of course stole the show. Its also almost humorous watching her go insane. It almost plays like a autobiography for the crazy self centered bitch that she was in real life but there is just something missing from this one. Its almost as if the film fails in its expected camp level and just comes off as a badly acted Hitchcock film. Could you imagine North By Northwest being played out by really bad actors with the exception of James Stewart? It would be a mess.

In the following year William Castle would direct a far superior murder mystery titled I Saw What You Did And I Know Who You Are not to be mistaken for that shitty 90's Last Summer movie. This one is really only worth a watch for Castle completest and Crowford obsessed lunatics. Everyone else should stick to the greats like The Tingler and House On Haunted Hill. 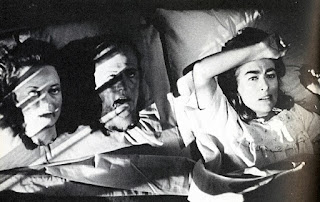