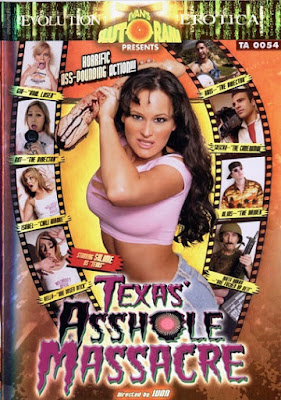 I wish there could be a real massacre taken out on the assholes that made this piece of shit! Try to follow me here. The movie starts off with some modern porn stars in a car explaining how they are going to become legit filmmakers and "Go from the blue-screen all the way to the silver screen". Then they get dropped off at a house where they are both fucked in the ass and deep-throated. Then a Vietnam war veteran makes a bunch of silly faces and rapes a white girl from England because she is a "Gook". He tries to rub her white color off her ass with some spit claiming that she painted herself and he knows she is a "Gook". Aside from the sheer racism of this scene he also searches her pussy for "Weapons and razorblades". He also sticks his cock in a bowl of Chili and makes the girl deep-throat it. Then we have another scene in which a female cook eats semen from a bowl of Chili. Oh and she also does some deep-throating and has asshole sex. In the last minutes of the movie a girl is running through the woods naked and doing her best Marilyn Burns impression as a big titted bitch in a apron chases her around, swinging a big dildo around. What the fuck!