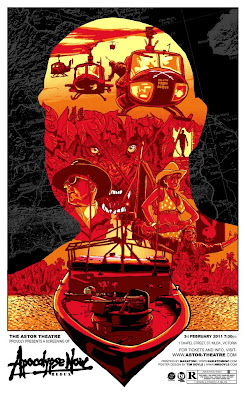 My earliest memories of Apocalypse Now goes back to the age of five. My father was working late and being a typical young boy from the 80's who was obsessed with guns, soldiers and war I stared at the television screen in both horror and amazement as Martin Sheen slowly crawled out of a swamp, covered in face-paint as lightning filled the locations sky. Once he makes it on to solid land it becomes apparent that he is holding a machete and is planing on doing some very wicked things. Suddenly my father walks in the front door and is quite pissed that my mother was in another room leaving me a bit neglected to watch Apocalypse Now.

My father threw a bit of a fit and changed the channel and those images that I witnessed that night have stuck with me all through my childhood. I knew that one day I would find out the name of the movie that my father wouldn't let me watch.

It wasn't until I was about twenty years old that I would watch Apocalypse Now in full. All through my teenage years I was rather obsessed with horror films and war films were a thing of the past. However once seeing this epic masterpiece in full I remember this sense of gratification what came over me once I saw Sheen in that swamp and the films climax hit me like a fucking train. Here is a film that is so striking in its atmosphere and mood that I felt this could possibly be the greatest movie ever made and for a horror buff I felt equally satisfied from the harrowing tale of madness. After all the last two words of the film is "The Horror". Isn't war the real horror-story in life? It certainly is awful and many more are affected by it then those who fall victim to a serial killer that is reenacted in the countless slasher films of the 80's that I was familiar with. This was something new and much horrific for me. 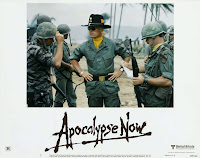 Directed by Francis Ford Coppola (Dementia 13, Rumble Fish). It tells the tale of a captain in the army, played by Martin Sheen, on a classified mission to kill an American decorated war-hero, gone insane, played by Marlon Brando. Insane isn't the word. Brando's character plays like a cross between a philosophical madman like Charles Manson and a patriotic victim of war. There is a sense of sadness to his character but the overwhelmingness of his barbaric brutality and insanity over comes in the end.

Aside from Brando and Sheen, Robert Duvall shows up for some light hearted laughs and very memorable lines. "Charlie don't surf". He blows the shit out of a section of Vietnam just so he and his boys can do some surfing. Dennis Hopper also shows up in a very typical role for him in the 70's. Its hard to tell if he is acting or just being himself here but I would almost bet money that he wrote his lines for himself or at least just winged it. Hopper's performance is brilliant as usual for this era and followers will not be disappointed.

Apocalypse Now is the greatest Vietnam film ever made. The cinematography is beyond amazing with transitions, fades and dissolves that can not be topped. There is a portion of the film where a character is on acid and while many films succeed in making the audience feel tripped-out this movie takes it to a whole other level. From this point on the rest of the film plays like a acid-trip and not a very pleasant one at that. I have not heard anything of a remake which is a bit of a surprise considering they love to remake and destroy everything they can possibly think of. This 70's classic is a trip into madness and the horrors of war. The film is untouchable and any attempt of a remake would make for nothing more then toilet paper. 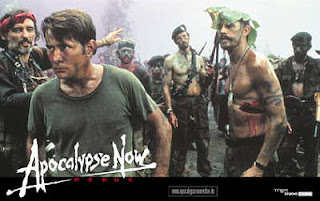