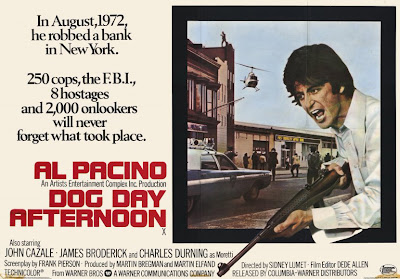 Al Pacino in one of his best roles in this 70's heist flick. Dog Day Afternoon is supposed to be based on a true story of a homosexual who robs a bank to pay for his lovers sex change operation. The robbery is botched up and we get a stand off between the criminals and the police with the bank tellers being held hostage.

Dog Day Afternoon's style and mood reminds me of movies like Taxi Driver and something that Paul Shrader would have written. Pacino's character Sonny is a great anti-hero in the ranks of men like Travis Bickle. Sure hes a criminal but he has charisma and the people of NYC need to relate to a nihilistic fuck up like this. During the all day and all night hostage stand off, Sonny gains the respect of some and the interest of the entire city with his radical verbal beatings towards the police. When it becomes known that he is a homosexual the city is in a uproar and every Tom, Dick and Harry feels the need to voice their opinions, as if the mans sexuality has anything to do with his actions or his impact on society.

John Cazale who I remember best as the big shot with a handgun who gets slapped around by Robert De Niro in The Deer Hunter plays Sal, Sonny's partner. Sal adds a whole other level to the film. His character is extremely awkward and it really says something about the company that our main character keeps. Sal is ready to kill everybody and commit suicide. He makes it clear that he is not ready to go "back" to jail and that death is a much better alternative but Sonny easily manipulates Sal into doing exactly what he wants.

Lance Henricksen (Piranha Part 2 : The Spawning, Pumpkinhead, Terminator) shows up as a sharp-shooter cop who puts a bullet cleanly between the eyes of the bad guy. We also get a cross-dressing lunatic, a bit of racism, a bit of sexism, a bit of violence and a political message to go along with it. A Dog Day Afternoon is a great example of brilliant 70's film making and a time in cinema that just doesn't exist anymore. Great dialogue, great writing, great characters and great acting adds up for a great movie.

Pay attention to the lack of music in the film. It really adds to the whole experience. 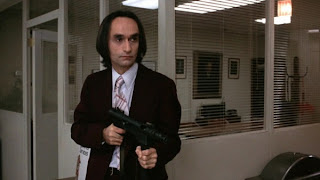