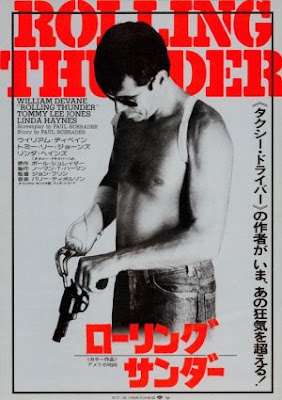 Is it just me or does that poster remind you a bit of Taxi Driver? Well that might have something to do with the marketing direction. After all this nasty tale of revenge was written by the great Paul Shrader, the same man who thought Taxi Driver up. In the two following years Shrader would write Blue Collar and Hardcore with George C. Scott. Shrader's writing from this error always deals with great characters and great tragedy.

Rolling Thunder is no exception to the rule. This one tells of a Vietnam war hero who returns home from years of being held captive as a prisoner of war. He can't quite shake the awful memory of being beaten daily and anybody familiar with these types of movies knows that this thing is heading down a pretty nasty path.

Things really change for the worse when a group of scumbags break into our anti-hero's home and stick his hand in the garbage disposal. Next they shoot his wife and son and leave him to bleed to death with a bullet buried in his guts. Luckily for us and to bad for them our war veteran doesn't die and with a hook for a hand he goes on a bloody rampage of vengeance with hand guns and sawed off shotguns.

Linda Haynes from Coffy and Human Experiments follows our hook-hand, gun-wielding, hero down his path of revenge until things get really nasty. That's where Tommy Lee Jones picks up the slack as fellow war buddy who is happy to fill some bad guys full of shotgun slugs for an old friend. Together the war partners create a whore house massacre. Bullets go flying and so do the bodies.

Rolling Thunder plays like a cross between Death Wish and Taxi Driver. Its a bit slow at times but still a damn good watch. The Exterminator would probably be a perfect second feature for this thing in a theater but instead I got Godzilla VS. Mechagodzilla. It was a theatrical experience I don't think I will forget. 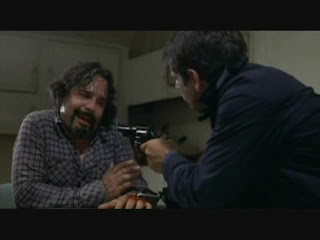