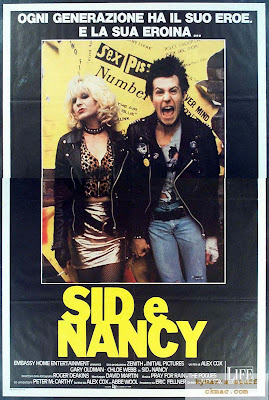 There is not a Sex Pistols fan out there who has not seen this 80's flick about the fast life and early death of the band and its bass player Sid Vicious. If there is, they can't be that big of a fan... 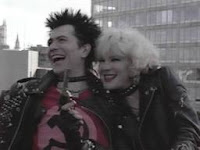 Sex Pistols films in general cater to obviously that certain audience but the fact that Sid And Nancy was a bigger budget film and certainly had wide releasing it is a surprise that writer/director Alex Cox (Repo Man) would make a film that explains nothing. Its almost as if Cox said fuck you to everyone else, I'm going to make a movie for the people who already know something about the subject at hand and everyone else can just fuck off. Its a pretty nihilistic attitude to go along with a nihilistic movie and the finished product became an immediate cult hit. Nobody else would want to sit through a two hour movie of two junkies shooting up, snotting on themselves and bleeding while incoherent music blares in the background.

All the important iconic figures are in the movie but of course there is no explanation behind the  characters. A John Spaceley or Gringo (Story Of A Junkie) character shows up for some screen time. A character named Rock Head who is supposed to be Johnny Thunders, Malcom Mclaren, Sue Cat Woman and many others and as if its not obvious enough that this is an intentional cult flick the dialogue although extremely funny, memorable and quotable is almost dulled out whenever any conversation of importance is going on. Of course with countless viewings one would know the script inside and out but yet again to everybody else... Fuck off!

Gary Oldman (True Romance) plays Sid Vicious and does an excellent job at that. From his body language to his slurred cockney speech. Chloe Webb plays Nancy and does an excellent job of portraying Nancy as the fucking horribly obnoxious piece of shit that she was. Before the films climax the average audience is awaiting the moment Sid kills her and puts us all out of our misery. Aside from the great cast Alex Cox's direction is amazing with excellent camerawork and plenty of symbolic trash to fill each frame.

So skip out on "the methadone clinic and go out in a blaze of glory" with Sid And Nancy.

Email ThisBlogThis!Share to TwitterShare to FacebookShare to Pinterest
Labels: Biographies, Sid And Nancy