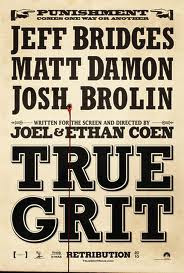 I recently broke a general rule that the average cinemaniac lives by when I watched a remake before seeing the original. I did this for a few reasons, the first being that the original 1969 film is a John Wayne movie and I personally have never been a big J.W. fan. As a young kid my grandfather used to watch John Wayne movies on the regular and I was just bored out of my mind. Now that I am older I am still bored by old J.W. and prefer the Italian spaghetti westerns and of course Clint Eastwood. On the other hand I have a certain interest in the Coen brothers (No Country For Old Men, Blood Simple). So naturally I gave the 2010 remake the first chance but now I feel the need to go and watch the John Wayne version and compare notes.

The Coen brothers take on True Grit starts off a bit slow with its main focus on a 14 year old girl named Mattie Ross whom sets out to avenge her fathers death with the help of a one eyed bounty hunter named Cogburn (Jeff Bridges). Cogburn and the young girl are joined by a good old boy Texas Ranger named LaBouef played by Hollywood-boy Matt Damon. Matt Damon's character sucks of course and all the entertainment comes from the one eyed Cogburn. Cogburn is a rude & crude, drunkard, killing machine and he has one hell of a voice. I highly doubt John Wayne's character is even half as cool.

In the most memorable scene Cogburn chops a mans fingers off, shoots his friend dead in the head and then leaves the fingerless man bleeding to death with a knife stuck in his chest. We also have an awesome shoot-out on horse back, a typical western target practice scene, some Cobra-snake-fu, gratuitous child kicking, Teeth being ripped out of bleeding mouths, public hangings and a typical anticlimactic Coen brothers ending.

Not a bad flick for a modern western and worth a watch for Coen brothers fans. 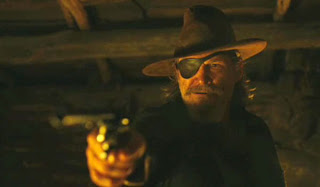