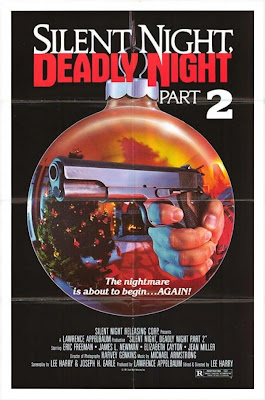 You like slasher movies? Then you would probably like Silent Night Deadly Night. You remember the one where Santa runs around with an axe and punishes everyone who has been "Naughty".  Linnea Quigley is impaled on a deer antlers and bullies are decapitated.

Well don't worry because you get to see it all again in Silent Night Deadly Night Part 2. The sequel runs just under 90 minutes and almost the entire running time is eaten up with footage from the first film. I believe we get to see every single murder from the original. Then when we finally get around to something fresh and new it is terrible. A man is killed with an umbrella in a ridiculous scene. Another is strangled, another is run over repeatedly by a van. Eventually we get around to a decent kill in a scene where a man has battery cables shoved in his mouth (the scene comes complete with bad 80's electric special effects and exploding eyeballs). Then we get another strangulation and eventually the big massacre that gives the movies its cult following. Our psycho killer walks through the streets and shoots people who are taking out their garbage "Garbage day!".

The fact that most of the film consists of footage from the first movie is only the beginning of the problems with Silent Night Deadly Night Part 2. The entire film is filled with continuity and plot holes. Anybody familiar with the first film knows that Santa gets blown away right before he chops mother superior up with an axe. The axe falls to the floor and the camera zooms in on the villains younger brother. Obviously they were setting themselves up for a sequel in true 80's fashion. The only problem is the new killer retells the first film step by step and the fucking guy wasn't even there. How the hell does he know what his older brother was doing on his own time?

Silent Night Deadly Night Part 2 is a mess of a movie but can be a bit of a guilty pleasure. It's not the worst movie to watch in a arthouse theater full of unruly, drunken, maniacs who like to throw things at the screen and yell through the entire movie. Good times! Just don't try to take it seriously. You would be better off trying suicide...