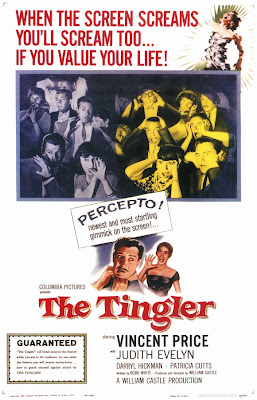 My favorite of all William Castle flicks. Released the same year as House On Haunted Hill which also stared Vincent Price. The Tingler has even more wacky spectacle to offer.

Including a new gimmick. Certain chairs were rigged up to an electrical system that would shock members of the audience during key points of the film to induce a tension in the audience. The idea being to cause movie goers to jump and scream and if the movie it self can't do it, a good shock to the ass will. To think that in 1959 movie goers would spend their money to be electrocuted is interesting on its own. Today we would have wimpy, cry baby, yuppies trying to sue theater owners. William Castles form of exploitation brought an audience into something that fell somewhere in between a circus attraction and a play and his films serve as a reminder of what a theatrical experience could and should be like today.

Vincent Price plays a (You guessed it) mad scientist who discovers a living organism inside the human body that grows in size when fear is induced. He calls it The Tingler and this little thing looks like a smaller version of the monster in The Creeping Terror. However size isn't a factor here because The Tingler is quite deadly. It can shatter mans spinal collumn or choke him to death. Once Price removes The Tingler from its natural habitat, the human body, all hell breaks loose. The Tingler goes on a murderous rampage inside an old movie house. Hence the electro-chairs.

The Tingler also offers up a scene where Vincent Price takes L.S.D. Where else can we watch Price take an acid trip? Price doesn't necessarily take a trip to hell like Coffin Joe in Awakening Of The Beast but he does wrestle with a skeleton and tries his best to refrain from screaming as the walls close in on him.

"Its not a drug. Its an acid" Price uses his new tripy drug on a deaf/mute and we are treated to walking corpses, axe throwing gorillas and a colorized scene involving a corpse in a blood filled bathtub.

The Tingler is the perfect remedy for anyone who likes cheesy monster movies from the 50's. Its filled with visible wires and continuity but that just makes it all the more fun. Vincent Price does a excellent job in this one and with his acting the viewer can almost take this ridiculous scenario seriously.

I have not been lucky enough to catch this one in a theater yet but I await the day that I get my asshole shocked with an audience who can enjoy the finer things in life. Electric chairs and monster madness! The Tingler is a must see and must own for William Castle fans. 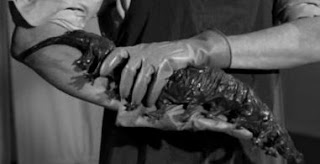 Email ThisBlogThis!Share to TwitterShare to FacebookShare to Pinterest
Labels: Tingler (The), William Castle