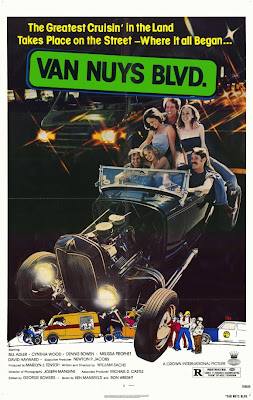 Yeah they really don't get more pointless then this one. In case you haven't noticed they based a whole movie around the hot cruisin spot in California. Van Nuys Blvd. is the street and this is where we see all the naked girls, drag races, fights, bad disco and destruction of vehicles.

Here's the plot if you can call it that. A bored young man leaves his small town trailer home, nympho girlfriend, job and television behind for a life of sex and partying on Van Nuys Blvd. He makes new friends almost instantly and I personally couldn't help but hate everyone in this movie. They are all so fucking cheery, I just want to puke. Its as if the cast from Happy Days made it into a sex comedy. Yuck!

Van Nuys Blvd. is very random and chaotic. You never know whats going to happen next except that it will most likely involve some gratuitous nudity. My personal favorite scene shows two young cruisers smashing the shit out of each others cars. Its total pointless destruction in the same vein as something like Herschell Gordon Lewis's Just For The Hell Of It. Some of the naked female flesh isn't all that bad to look at while others should probably have been avoided. The best looking girl in the whole movie is a blond biker babe who comes complete with leather bra, pants, gloves and studded belt. This one also sports a lot of sweet 70's mustaches, stupid cops, stupid kids, stupid adults, a horrible theme song, a worse disco song, a sex food fight and a very awkward scene where an old man hops in bed with his naked daughter and plays with her boyfriends ass.

Not really my kind of movie but if stupid comedies with lots of tits and cars is your thing you might wanna check this one out. From Crown International. 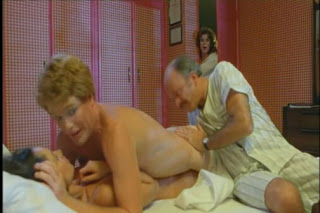 Email ThisBlogThis!Share to TwitterShare to FacebookShare to Pinterest
Labels: On The Road, Sexploitation, Van Nuys Blvd