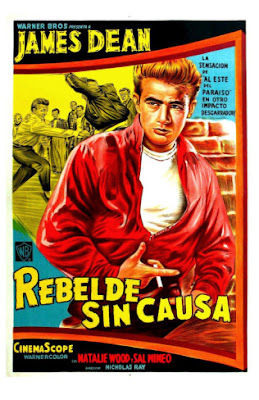 Rebel Without A Cause, the first major production of a Juvenile Delinquent film. It most certainly wasn't the first but it was the one to blame for countless exploitation delinquent films including the great Blackboard Jungle which would come out the same year and bring rock & roll to the big screen.

James Dean plays Jim Stark, a troubled teen. He is new in town and ready to leave all the problems from his last town behind him but he finds himself in a whole new mess of trouble with a gang of leather clad kids ready to make his life a living hell.

Remember those wonderful days of high school when all the robots thought they were tough. Well Jim is tough but he is tough on his own terms. James Dean portrays a natural born rebel. Less concerned with what the others think and more so his own convictions. Rebel Without A Cause depicts the hardship of teenage years through Americas favorite image of rebellion.

I think the thing that makes Rebel Without A Cause so memorable isn't the fact that James Dean is considered to be so good looking but rather that his character is seen doing these really bad and dangerous juvenile things but he really is a good guy. He takes action against his parents, teachers, cops and even his schoolmates out of honor and self conviction. If it means having a switchblade fight or driving a car off of a cliff it is still better then being weak to ones self.

Of course the chicks dig it because they get to see James Dean being all romantic with Natalie Wood and the dudes can't help but want to be Jim Stark. He's cool, he's tough and he's a total rebel.

Some of the other highlights consist of a very young Denis Hopper in his first feature film as a young street punk. A crazy bastard named Plato who likes to kill puppies and shoot at cops, dead teenagers, shit-head parents, shit-head teachers and some cool 50's cars.

A true classic that stays with you forever.

Email ThisBlogThis!Share to TwitterShare to FacebookShare to Pinterest
Labels: Juvenile Delinquents, Rebel Without A Cause