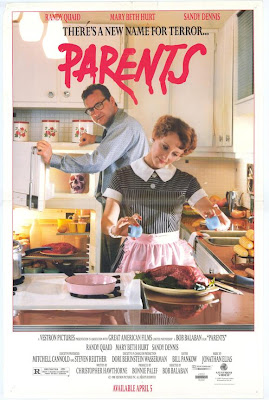 Parents is a psychological thriller with a very dark sense of humor. It follows an alienated kid named Michael who doesn't fit in at school and definitely doesn't feel comfortable around his parents.

Randy Quaid plays daddy and as you would have guessed he is a complete weirdo. Michael is completely intimidated by his parents. They are awkward and just plain creepy. Michael has been having some very strange dreams and pictures his parents as monsters. The young boy is also a vegetarian and mom and dad just can't figure him out. As the film moves along Michael becomes obsessed with his parents eating habits and everything is pointing at cannibalism. It never becomes clear until the end of the movie whether or not Michael's mom and dad are in fact eating people but it does all end in tragedy and of course death.

I liked this movie for multiple reasons. The first being that the viewer never really knows where it is all leading to. Secondly it portrays Parents as the weirdo's that they really are. I think every kid has looked at their mom and dad in complete confusion.

Personally not being a vegetarian and very fond of meat I have to admit that Parents does make meat eating look very horrible. I would think the main audience for this movie would be vegetarian horror-hounds. Especially those who didn't enjoy eating meat from childhood.

Randy Quaid is awesome, the character of Michael is cool in a alienated loner kind of way and Parents offers up some very funny moments mainly between father and son.

Not a bad change of pace from the normal sleaze-fests and slasheramas that I am used to and it would go perfect with a BBQ ribs diner. 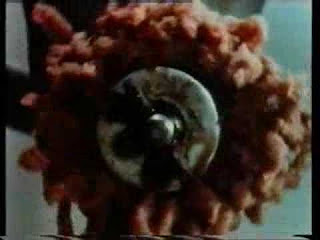 Email ThisBlogThis!Share to TwitterShare to FacebookShare to Pinterest
Labels: Parents