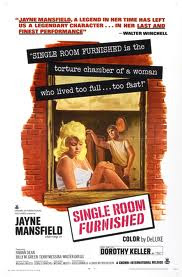 Single Room Furnished is the last of Jayne Mansfield movies. Released after the sex symbols tragic death we have Jayne as three different characters that all link together before the film is done.

The truth is that this movie is as boring as the title. It tries its best to be dramatic and ends in tragedy which I guess is suiting for Jayne Mansfield's last film. Jayne plays Johnnie, May and Eileen all of whom turns out to be the same character in the end.

Its hard to say what the worst part of this movie is. Is it the absurdity of the dramatic story? Is it the stupid characters? Is it the awful Go-Go dancer scene? No it is got to be the acting. The acting is awful in this movie and the worst performance probably comes from Miss Mansfield. Just watch for the scene where she comes in from the rain soaking wet and sneezes. Its just amazing how awful she really is in this.

Single Room Furnished has it all wrong. Why make a serious drama movie when you have a talentless beauty like Mansfield? This is when you be a gentlemen about things and make a good and proper sexploitation film. Throw in some underwear scenes, some sexy dancing or bubble baths. Anything but more dialogue. Another thing that really bothered me was how all of the actors seemed to be putting on a stage show. I guess we can also blame the director for this, who would go on to do the blaxploitation biker flick The Black Six which also isn't all that great.

If you are looking for Jayne Mansfield sexy stuff you could probably skip right over this one. Sure she looks good in some of her outfits but it just doesn't make up for the lack of over all quality. What they should have done was cast Briggite Bardot in this movie for more sex appeal and much better acting. 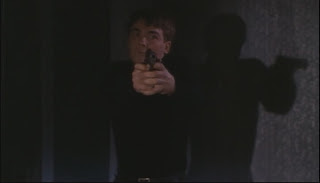