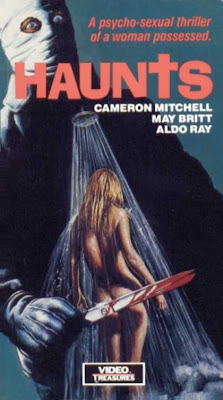 Haunts has some of my all time favorite VHS cover art. The masked killer, the naked girl in the shower and of course those bloody scissors. Its too bad the movie isn't as cool as the art work was.

Haunts isn't a complete waste of time. It is still worth a look. It just could have been improved with more sex and violence.

This early example of the American Slasher film involves a madman terrorizing the countryside with a pair of scissors as a weapon of choice. This guy has the knack for cutting up young girls and the autopsies show that he also rapes them.

Haunts is a sort of mystery as well. We have a number of sleazy suspects. One being a local butcher who wears a silk, pink and black rockabilly shirt and enjoys drinking and driving, talking dirty to the ladies and threatening lives with... yep you guessed it, Scissors! Cameron Mitchell plays a creepy farmer who likes to sneak into the bathroom while his niece is taking a shower. Can anyone remember another 70's movie with scissor murders and Cameron Mitchell? The Demon ring a bell? Hows that for a double bill The Demon and Haunts for a scissor-slasher night. 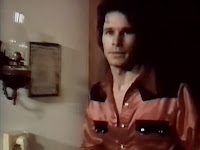 The director would go on to do the 80's high school slasher Graduation Day with John Saxon. Aldo Ray also shows up in this one along with a local bimbo who calls everyone "a creep".

Haunts eventually changes its tone from slasher territory to a delusional mess where not much makes sense until the very end where everything is spelled out for us.

The only problem with this movie is that there isn't enough graphic murder scenes and somehow they managed to avoid nudity which is very weird for a 70's rape-happy slasher film.

However considering Haunts is in the public domain it is worth the one dollar it cost to buy. Even if you don't like the movie, you could always stare at that cool cover art. This one is also known as The Veil, not to be confused with the Boris Karloff television series. 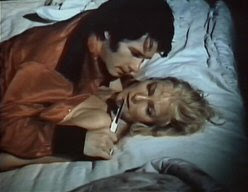