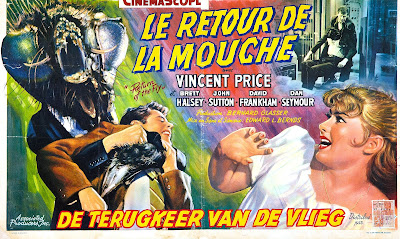 For the best review of this movie you could always just listen to The Misfits song "Return Of The Fly with Vincent Price. You Guinea pig! Yeah Return Of The Fly" Yes this follow up to the classic 50's monster movie The Fly is actually my favorite in the series. Far more campy then the original with more monster mayhem and more corpses left in its wake. 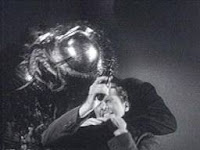 Return Of The Fly takes off 15 years after Andre crushed his head in that vice. His son Philippe, now a grown man is determined to continue his fathers insane work. The series of events start all over again and we have a giant fly-man running around killing people.

Philippe teams up with a criminal named Alan who plans on stealing the discovery and selling it to the military. Vincent Price does everything he can to stop the duo from messing around with the cursed machine but he ends up catching a bullet in the guts instead. Its a classic example of nice guys finish last in this one. I have to admit on thing that always annoyed me about The Fly movies is that Vincent Price is a good guy. It just doesn't seem right. Well I hope youre enjoying that bullet in your stomach, Mr. Nice Guy. 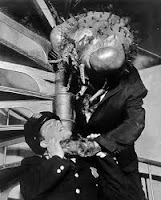 This movie is great. Aside from the expected man with a giant fly head we also have a man who has his atoms crossed with a rat. The rodent is crushed and killed under a mans boot and we see these human hands reaching out from under the boot. Next we see the rat-man. A man with the hands of a rodent. Its pure camp at its best. The sequel also offers up a bigger bodycount including a dead cop which is always a nice touch.

I mentioned earlier that Return Of The Fly is my favorite in the series but I am yet to see Curse Of The Fly which is the third instalment so perhaps I spoke a bit to soon but I definitely prefer this one over the 80's remakes. Probably because Return Of The Fly was directed by the great Edward Bernds the man who was responsible for so many of the Three Stooges shorts. Edward Bernds would also do Reform School Girl and the wacky space babes movie Queen Of Outer Space one year earlier to the Return Of The Fly.

Return Of The Fly was shot in black and white to save some money. The acting in this one isn't all that great. The story seems a bit rushed and its nothing more then a cheesy monsterama mess but it makes for high camp entertainment. I personally feel it makes a better cult film but thats just me.

Email ThisBlogThis!Share to TwitterShare to FacebookShare to Pinterest
Labels: Monster Movies, Return Of The Fly