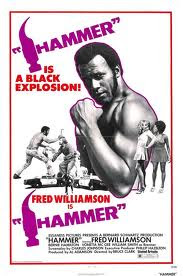 What we have here is the very first Blaxploitation film in Fred "The Hammer" Williamson. Made with Williamson in mind and even named after him this one stands as a milestone in the athletic actors long exploitation works. Hammer is not the best in the genre and it certainly isn't the worst and well worth a look for anyone who digs Fred Williamson or just blaxploitation films for that matter. 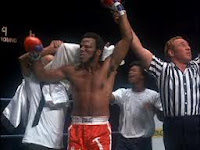 Williamson plays a down on his luck blue collar worker named B.J.. Yep his name is B.J. but this brotha doesn't suck for anyone. When B.J. is fired from his shitty day job for being a total bad-ass mofo and beating the shit out of a white fascist type, he is offered a job and a chance to be a professional boxer. As B.J. makes it to the top he gains a bit of street fame and earns the nickname The Hammer... Just like in real life huh? However its not all bitches and Cadillacs for B.J. Hammer. His boss is a corrupt mobster named Big Sid and when The Hammer gets on Big Sid's bad side he has to answer to Sid's big goons. Drive-In movie fanatics will be happy to know that the heavy of the white mobsters is played by the great William Smith (Run Angel Run, Black Samson) and he is the stereo typical racist, murdering scumbag that shows up in so many of these blaxploitation movies. 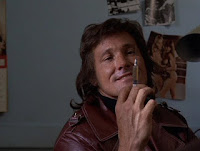 William Smith specializes in killing black men who are no longer of service to him. In one of the most memorable scenes Will Smith runs a pimped out drug dealer down with his car and leaves a bloody mess of a corpse behind but he also pulls the old shoot-em-up with some drugs and make it look like an overdose trick. Ya know from Superfly, Coffy and The Mack. In reality this doesn't really seem like the best way to knock somebody off but it always seems to work in these blaxploitation movies. I can't help but wonder the audience reaction to this in the 70's. Did people really think the man was killing street people off with poisoned dope? Anyway in some senses Hammer is pretty stereotypical but in others it is very different. For instance Fred Williamson is one hundred percent a good guy. He isn't a drug dealer and he isn't pimping bitches out. Even the cops in this one are good guys and I guess that's because the leading detective is a black man. 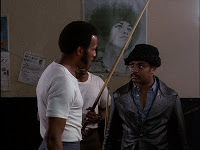 That Bad D'Urville Martin from Dolemite shows up as a big mouth, shit talking joker type and The Hammer has to set him straight with some sweet 70's jive jargon. I guess B.J.'s words of street wisdom hits close to home because in the end D'Urville cleans up his act and helps The Hammer get his revenge.

As expected Fred The Hammer Williamson gets the girl and saves the day. As I said before it isn't the greatest Williamson movie but is still worth owning. Check it out sucka! 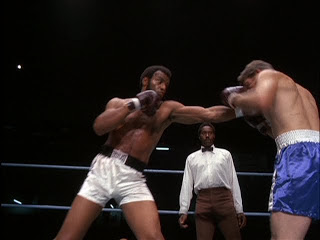