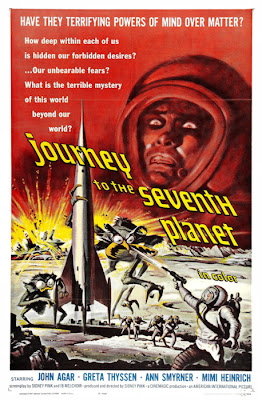 This one had a lot of potential but takes it all in the wrong direction, leaving behind a boring and unmemorable mess.

The king of 50's monster destroyers John Agar (Tarantula, Mole People, Revenge Of The Creature) Journeys beyond space to the seventh planet and yes the seventh planet is Uranus. For all of those who have not ventured to Uranus it is the sleaziest of all planets. It is occupied by hot women in sheer clothing. Of course there is also something more sinister within Uranus but that goes without saying. 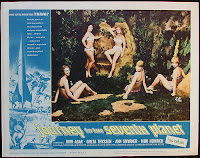 I personally would rather watch Doris Wishman's nudist-camp classic Nude On The Moon for crazy alien space-bitches. Nude On The Moon was released one year prior to Journey To The Seventh Planet and one can't help but wonder if the journey to Uranus was influenced by the queen of sexploitation. Of course hot space babes was nothing new. We had the campy Queen From Outer Space in 1958 which is also much better then Journey To The Seventh Planet.
The few interesting moments include a stop animation giant rat creature, some psychedelic special effects, silly space suits and really cheesy weapons.

You would probably be doing yourself a service by skipping this one. Unless of course you are a John Agar fanatic. 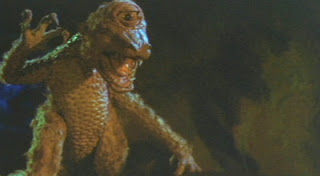 Email ThisBlogThis!Share to TwitterShare to FacebookShare to Pinterest
Labels: Journey To The Seventh Planet, Monster Movies