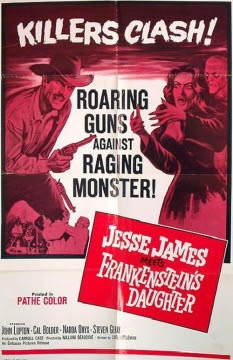 Directed by one of exploitation cinemas forefathers, William Beaudine (Mom And Dad, Bela Lugosi Meets The Brooklyn Gorilla) and designed to be double billed with Billy The Kid Vs. Dracula which David Carradine once stated is the worst movie he ever made. What we end up with is one of the weirdest westerns ever made.

As you might have guessed Jesse James Meets Frankensteins Daughter blends the western genre with the classic Universal Studio's Frankenstein and right off the bat this movie lies to us because it isn't Henry Frankensteins daughter that meets Jesse James but it is actually his granddaughter. Either way I love any exploitation title where a character is a straight descendant of Henry Frankenstein. It just makes me chuckle. Remember I Was A Teenage Frankenstein? The mad scientist in that one is also in the Frankenstein family. What I want to know is, who pissed in the Frankenstein gene pool? This family has produced generations of mad scientists. Anyway Henry Frankensteins granddaughter leaves Europe and settles in America along with her brother Rudolph Frankenstein who for some reason has a very hard time faking a German accent. Actually he has a Spanish accent and appears to have a golden brown skin tone unlike his sister Maria Frankenstein. Wait... Isn't Maria a Spanish name? This movie is all mixed up right from the beginning.

Anyway the Frankenstein's are in America because there are more electrical storms. For some reason I am not buying this either. Again they are trying to bring the life back to dead and all of the local townsfolk have left the area because they are not the scientific type as you would have guessed. Well Jesse James and his big ogreish retarded friend Hank were just caught up in a robbery gone wrong and Hank catches a bullet in the arm which is all acted out pretty horribly. It just so happens that the nearest doctors are the Frankenstein's but before Jesse James can say draw his retarded friend is turned into a walking mongoloid corpse. Maria Frankenstein uses Hank the retarded monster to do her evil bidding and this basically consists of strangling everyone in town. The monster kills a local cop, a doctor and strangles just about everyone who comes into sight. All of course on Maria's orders.

Unlike the real Frankenstein, Hank doesn't have bolts coming out of his neck. Instead he has a shaved head with a big stupid scar that wraps around his cranium. Also the corpses are not lifted up above a castle for reanimation. Instead Maria Frankenstein puts them in this really stupid looking crash helmet with two giant electro's coming from the top of it. The helmet is painted red, yellow and green and it is the silliest looking contraption I have ever seen. For the helmet alone Jesse James Meets Frankensteins Daughter is worth a watch. Still I have to admit, this one is not for everybody. Only lovers of bad cinema can respect the insanity that this one has in offer.

Of course the film could have been much better then it really is. Here are some of the flaws. It is way to talky, it is way to clean, and when I say clean I mean there is not really much blood to speak of and there is no naked female flesh on display. Its filled with plot holes and offers up some of the worst character development of all time. However I still do enjoy this film. I like Hank the giant retard, I like the bad acting and more then anything I love the stupid fucking helmet. Check this one out if you are in the mood for some ridiculous antics with cowboys and monsters. Oh and it is way better then Billy The Kid Vs. Dracula. That one can really be skipped all together. 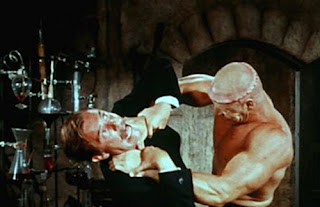