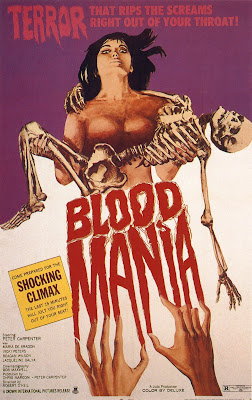 Are you sure this is an American film? Blood Mania is a strange one. Most people knock it and say it is way to talky with not enough murder and bloodletting. This may be true but they are missing everything that is cool about the film.

Blood Mania plays like a cross between a soap opera and a Giallo. I say soap opera because yes the film is a bit talky and the murders are very spaced out but the camera angles and lighting make for a really nice looking horror gem that American movie goers could look over just a little to easily. Look at this movie. Its beautiful. You can see some Argento in there. You see some Bava in there. Even a touch of early Polanski. Blood Mania looks fantastic and has a pretty good story to go with the cinematography.

A young good looking doctor is being black mailed for a large sum of money over some illegal abortions that he was doing while in medical school. If this information leaks out it will cost him his job and he didn't go to school all these years and pull all those bloody babies out for nothing. One way or another the doctor will have to come up with the cash. Luckily for him he is a bit of a playboy and girls really seem to like him for some reason, especially Victoria a rich nymphomaniac who enjoys taking off her clothes in front of young men just for a reaction. The doctor goes to Victoria in his time of need and she promises him that she will get him the money as long as he becomes her personal sex toy. Little does Dr. dumb-ass know that Victoria plans on killing her invilid father and collecting the inheritance money. Now not only has Dr. dip-shit been covering up an abortion scandal but murder as well. Things get worse and worse for the doctor as the plot becomes more complex and it becomes quite evident that this is all gonna end in more tragedy.

As I mentioned Victoria is quite the nympho and lucky for us guys out there we are treated to plenty of full frontal female nudity. All of the girls in this movie are pretty good looking, including Victoria's sister who has some giant early 70's hair. Blood Mania offers up jealous lesbians, a rape scene, a few creepy moments including a murder by poison, sex, drugs, a gory murder sequence in which a woman has her achy-breaky skull smashed in with a candel stick, a really cool necrophilia painting which I wouldn't mind hanging up in my own house and crazy Italian style cinematography. I think the real audience for this movie would be anyone who really digs the work of the Italian masters. Lucio Fulci fans are sure to enjoy the sexual nature of the film.

The only thing I could agree with some of the others who like to shoot this one down is that it wouldn't have hurt to throw in a few more murders here and there but in Blood Mania's defense it is not a slasher film nor does it try to be. Instead Blood Mania makes a macabre statement about greed and the sociopathic tendencies of money hungry lunatics. There really aren't many good characters in this movie and it comes complete with a typical 70's downer ending.

Also known as Pornomania which I thought was very amusing and catchy.