Once again we have to give a round of applause to the Japanese for coming up with such innovative forms of smut and sleaze. This one comes in the form of a super hero for hire known as Rapeman. Need I say more?

Rapeman derives from a popular Japanese Manga book of the same title and is not the easiest of items to find on dvd with English subtitles but is well worth sorting out and makes for a nice novelty addition to your trashy dvd collection.

Rapeman is a good guy. Just look at that face. Rapeman stands for justice through penetration. Decked out in a black hockey mask, a leather jacket, leather gloves and comes complete with handcuffs and a trusty butterfly knife. He helps the helpless rape by rape.

This early 90's filth-fest is shot on video and is extremely low budget but unlike the majority of American shot on video garbage Rapeman offers up a maniacal story in pure bad taste.

Just like our beloved Superman, Rapeman is your average every day joe. In this case he is a school teacher and the students love him, especially the girls. On a typical day Rapeman is given gifts from his female students. They show their appreciation to their teacher by giving him their panties but by night Rapeman has to get to work and his latest case turns out to be a big mess. A jealous waitress at a night club hires Rapeman to victimize the wife of a corrupt politician. Rapeman obliges and takes care of business but he is double crossed and black mailed. Soon Rapeman finds out that the politicians are working for the Yakuza and it is time to take the bad guys out one rape at a time.

Rapeman is not a gore flick at all. It is pure exploitation however. The rape scenes although very strange are shot in slow motion. This doesn't look all that great. In fact it is a bit on the blurry side but the blurry imagery and the shot on video cheapness is easily looked past due to the outrageous subject matter.

Might not want to watch this one with your girlfriend unless she is really cool. There is lots of nudity and rape mashed into a short 74 minute movie. I could see most being offended by this. Definitely not for everyone but then again those sensitive types would probably not even be reading this. 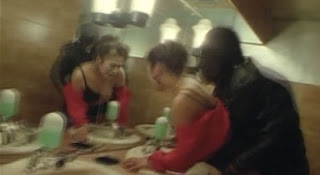