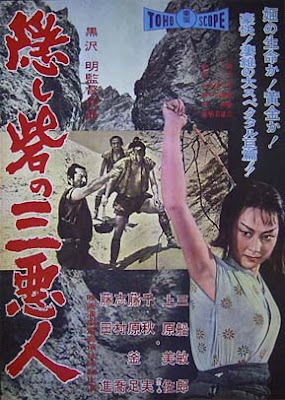 Akira Kurosawa is often thought of to have been influenced by American film makers, John Ford especially. While I do not have any doubt of this in my mind I find it strange that nobody ever makes a connection between Kurosawa and Alfred Hitchcok. There is a genius simplicity that runs through the films of Kurosawa which I can only relate back to Hitchcock. Its not that the films themselves are simple. They are quite genius but they play more as a giant set piece. The story itself is simple but the way it is told is not for the simple minded.

The Hidden Fortress is told from the point of view of two moronic cowards. These piss-poor peasants have no back bone at all and fear everything but each other. The two cowards attempt to get home but are stuck between enemy boarders in a time of war. They pussy-foot around until they come across a legendary Samurai named General Rokurota Makabe played by the great Toshirô Mifune (Seven Samurai, Yojimbo, Throne Of Blood) and nearly two hundred other titles. The Samurai plays off the greed and arrogance of the two cowardly peasants to help pass a sixteen year old princess over enemy lines.

Bribed with gold the peasants fall right into the scheme of things. Of course they have no idea that the young beauty is a princess. The princess humiliates her self for the benefit of her people and poses as a mute and the two cowards take every chance possible to try to get their greedy little hands on her nubile body.

There is this twisted sense of humor that flows throughout The Hidden Fortress which Kurosawa fans should be familiar with. There is almost a sort of Three Stooges thing going on in here. Its almost as if you threw the Stooges into a Hitchcocks Rope or Rear Window. It really has to be seen to be understood.

The Hidden Fortress sports some epic Samurai action. Nothing overly bloody but epic none the less. We have casts of hundreds rioting through the fallen barren lands of a Japanese war zone. We also have a really cool chase scene on horse back where men are sawed into with Samurai swords. The sex appeal comes from the sexy princess who for some reason wears silly looking shorts and in the films sleaziest moment the camera peeks pretty close up those shorts. The dialogue is exceptionally funny in this one. "I hate your face" "I hate the way you look, you shit worm". "Shit-Worm" is used quite a bit in this one. I don't exactly know what a shit-worm is but I like the sound of it. I guess its like a maggot or something unless of course its one of those crazy bugs that you only see in Japanese movies.

For a good time with swords play, shit-worms, action and comedy check this one out. Like most Kurosawa films it can be a little slow at times but the set pieces are just to good to pass up.