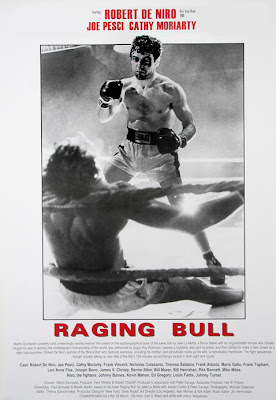 When Martin Scorsese and Paul Shrader team up you know you are in for something powerful. There specialty seems to be damaged people and that is exactly what we have here. Raging Bull follows Jake La Motta a prize fighter who seems fixated on self destruction.

With a screenplay from Paul Shrader (Taxi Driver, Blue Collar), direction from Scorcese and some of Americas greatest actors Raging Bull really couldn't fail. Robert De Niro was such a great actor back in these early days (Mean Streets, Taxi Driver, Deer Hunter). Yet again he delivers an excellent performance of a man with a warped mind. Its to bad he just coasts through lame-o comedy roles now-a-days. His performance in Raging Bull allows the audience to fear him and feel bad for him at the same time. It is a very emotional film and packs a pretty heavy punch, literally.

The thing that separates Raging Bull from other American boxing classics is the heavy drama that is layed out for us. Jake La Motta is filled with angst. When he steps into the ring his hatred takes down the opponent and sends Jake to the top but when he is home that hatred explodes onto his friends, wife and especially himself and we witness this talented man self destruct. Like most early Martin Scorsese films Raging Bull doesn't paint a pretty picture. The disturbed character falls deep to the pit of despair and he doesn't ever seem to want to come back up. Jealousy, anger and great ambition make for a pretty unforgettable character. The black and white cinematography, the intensity of the fight scenes, the drama and the terror all make Raging Bull the unforgettable classic that it is. 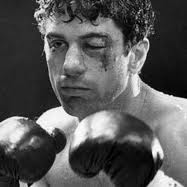 I wouldn't recommend watching Raging Bull with your girlfriend if she is amongst the feminist type. You might just find yourself in the ring with her afterwards. Raging Bull is set in the not so tolerant 40's where women were supposed to be seen and not heard. Jake La Motta's wife endures so much abuse in this movie. It becomes very unnerving even for a man to watch so I would imagine that this movie could invoke a bit of hatred deep within a woman.

I can not imagine what it would be like to be hit by a professional middle weight boxer, let alone being a woman subjected to that torture. Robert De Niro takes this role and owns it. He is the Raging Bull. He is a mad bull but the one he hurts the most in the end is himself.

Just about everyone and anyone who is into boxing as a sport has probably seen this movie for historical reasoning alone but it is a movie that should be looked at by everyone who is into cinema all together. The only problem I have with this movie at all is that it seems to just slowly die off in the end. I kind of wish it ended in complete nihilism like Taxi Driver or Mean Streets.