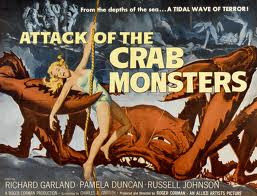 Directed by Roger Corman, Attack Of The Crab Monsters is everything and more that you could want from a 50's monster movie. 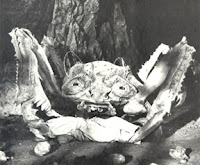 First off it clocks in just over one hour and it moves along at a nice speed with a fair amount of monster mayhem, gore and a ridiculous scenario that one can't possibly take seriously.

Attack Of The Crab Monsters opens up good and proper with a nice & bloody decapitation. The giant killer crab rips a mans head from his body and the headless shoulders are pointed straight at the screen for our viewing pleasure. Sure from time to time these 50's monster flicks offer up some severed heads but it is very rare when a film would open up with a scene like this. The only other one I can think of off hand is The Crawling Eye. As the film moves on we are treated to other beautiful scenes of dismemberment such as a severed hand which rolls across the screen in gory delight.

Aside from the decapitation and the flying hands Attack Of The Crab Monsters displays big breasted 50's women who come complete with tight sweaters and night gowns. However aside from the boobage our lead actress isn't all that nice to look at in the face and she really does cake on the makeup but lets face it we came here to see giant crabs killing humans, not titties from the fifties.

This one plays like a sort of early version of Attack Of The Giant Leeches considering both showcase telepathic monsters who lure new victims in with their superior intelligence.

By the end of the movie things are looking pretty bleak for the humans. The monsters have pretty much killed off every character in the movie and destroyed most of the land around the survivors.

The truth is that it all ends rather abruptly and seems a little rushed when it is all said and done. However this is a small price to pay for a bad-ass quickie from the 50's with monsters, blood & guts.

I place this cheapie in the same ranks as movies like The Monster Of Piedras Blancas, The Crawling Eye and Brain That Wouldn't Die for examples of early, schlocky monster movies with gore and dismemberment.

This ones just awesome!

Email ThisBlogThis!Share to TwitterShare to FacebookShare to Pinterest
Labels: Attack Of The Crab Monsters, Monster Movies