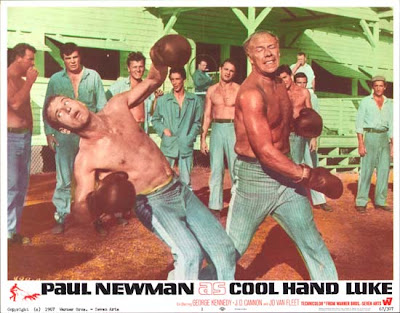 I first saw Cool Hand Luke as a young boy with my grandfather. The images of the car washing blond bombshell has stuck with me all these years even though I have not went back and looked at this film again until now. As a young boy I think my eyes were going to pop out of my skull as I watched those soapy boobs molest that car. I think any man can relate to the prisoners in that scene. A female vision of perfection that is there for the taking but somehow beyond reach. Just an amazing scene. 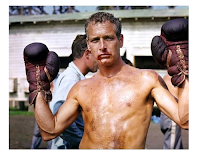 Looking at this movie now I can't help but relate it to the juvenile delinquent flicks of the 50's like Rebel Without A Cause. Of course by nature Cool Hand Luke is not a true juvenile delinquent flick because Luke (Paul Newman) is an adult and not a youth. Still the message, feel and pace is very similar to something like Rebel Without A Cause or even Blackboard Jungle.

Paul Newman's character  is a complete rebel. He can't make it in society and finds himself locked away as a prisoner and part of a chain gang. The young rebel is sentenced to two years for cutting the heads off of parking meters during a drunken reckless night. Luke proves to be just as rebellious on the inside as he was on the outside and being a man full of integrity it is not long before the other inmates look up to him as a sort of leader.

Not only does Luke struggle with the establishment and the powers that be but also with the insanity of religion. Being a man of strong convictions Luke has no room for a god in his life. Or is it the other way around? If there is a god it certainly didn't cut Luke any breaks in life. There are images within the film that show Luke himself as a crucified figure and he takes his share of abuse mentally and physically.

Amongst the inmates is George Kennedy (Creepshow 2, Just Before Dawn) as Dragline, a bad-ass boxer. We got Harry Dean Stanton (Wild At Heart, Repo Man) as Tramp, a cowardly follower and even the great Denis Hopper shows up as another number in the chain gang.

Cool Hand Luke has made its mark upon society. Even those who have never seen the film know the line "What we have here is a failure to communicate" Those who have seen the movie are not likely to forget the images of Cool Hand Luke's fight scenes or the egg eating contest and especially Joy Harmon's breasts. An amazing piece of cinema!