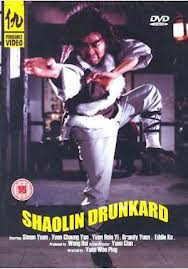 Remember Taoism Drunkard? Ya, know that crazy Kung Fu flick with the watermelon monster? The one who eats virgin boys penis? Well Shaolin Drunkard is supposed to be a follow up to that movie but since neither one of these films follow any sort of a coherent plot it is hard to call this a sequel.

This one doesn't offer up a penis eating watermelon monster but it is just as weird and wacky. Our rat faced, buck-toothed, drunkard has to fight and capture an evil wizard with vampire fangs. This task is not an easy one. The evil wizard uses magic, giant frogs, puppets and something that looks like giant cock-rings as weapons of choice. Our drunken hero teams up with a young martial artist and a girl with a giant birth mark on her face, which looks more like a skin disorder. As I mentioned this movie is way to crazy to have any sort of real plot. Basically we just have one weird scene after another. It is extremely fast paced and a very fun watch.

Shaolin Drunkard offers up excessive wine drinking, some bare-ass man action, very strange puppets, gratuitous use of the word "bastard", some very fast kung fu scenes, sexism, men in drag and moments that are just so weird you have to laugh. This thing was supposed to be a comedy of sorts but it works better as a novelty in the bizarre.

See a man drive around in a self built little wooden car with a bomb attached to it, a fire breathing dragon, a killer kung fu puppet, a man who fights with his hands on fire and a crazy scene with ass-puppets which reminded me a little bit of Coffin Joe's Awakening Of The Beast.

Recommended for anyone who liked Taoism Drunkard or just digs crazy Hong Kong kung fu flicks. I personally like this one a little bit more then the penis eating watermelon one but both are high in entertainment. Brought to us and most easily exesible from those rap clowns from Wu Tang Clan. 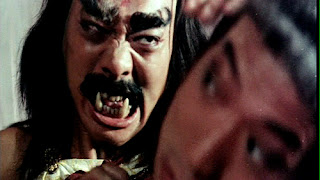