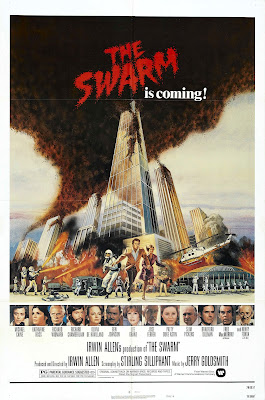 I always thought these killer bug, nature gone wrong films were supposed to be fun. Not quite the case with Irwin (The Poseidon Adventure) Allen's The Swarm. Yet again Irwin Allen tries to make a giant epic production and it really hurts the film.

Like The Towering Inferno and other Irwin Allen movies The Swarm is entirely to long. It clocks in around two and a half hours and that is just way to long for a movie about killer bugs. Most of the runtime is eaten up by boring chit chat and by the time we get around to more deadly bee stings we are fighting to keep our eyes open.

Michael Caine plays a scientist who is supposed to save the world against The Swarm of African Killer Bees. The bees have mutated into a very deadly force. Only one or two stings can kill a grown man. The seemingly endless experiment scenes seem to go on forever as we witness failure after failure. Henry Fonda plays a wheel-chairing cripple doctor who works along slide Michael Caine and cult status Cameron Mitchell (Toolbox Murders, Blood And Black Lace, It Came Without Warning) shows up for more useless dialogue. 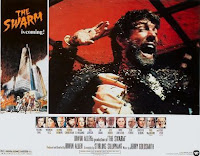 Some of the high notes of the film include dead children, a mother and father are killed at a family picnic and the preteen son takes off in the family station wagon, we get a giant reappearing monster sized bee, flamethrower action, a derailed train full of teachers, cops and townsfolk and of course swarms of bees covering helpless victims.

If the Swarm was cut down to 90 minutes or less it probably would have held out okay as another bugs destroy man movie but due to its over ambition it falls into the category of seen it once and once is enough genre. Even the climax is a big let down. I wont give away the ending but it sure to disappoint anyone who digs these 70's nature gone wrong flicks.

Only worth looking at if you have two and a half hours to waste and if that is the case there are plenty of other movies you could choose before this one. 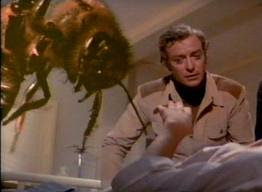