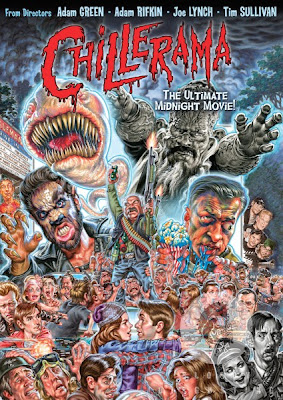 When I saw the trailer for this I didn't expect anything all that spectacular. First off its from 2011. Secondly its very low budget. The only thing that made me want to see this movie at all is that it was obviously made by fan-boys and it would most likely play like one big throw back to a time when horror films were still watchable. That and of course the fact that it looked pretty raunchy.

Well I pretty much hit the nail right on the head. This schlocky monster comedy is a total fan-boy movie. Chillerama is an anthology horror movie homage to movies like Creepshow and Tales From The Crypt. The first flick is done in total bad taste and goes by the demented title of Wad-Zilla. Yep you guessed it... Wad-Zilla is a giant sperm monster who takes over NYC and leaves a slimy mess of destruction and carnage in its wake. This one is pretty damn funny in a very sick way. It holds this child like humor similar to something like Monsturd. So if you like childish potty humor you might actually enjoy this movie. Where it goes wrong is the massive use of CGI. It seems that these ass-hats behind Chillerama could not make up their mind if they were going to use practical special effects or use computer graphics. They end up using both and it makes for a pretty uneven mess in the end.

The next short feature is a mockery of the 50's Juvenile Delinquent films called I Was A Teenage Werebear which I didn't like at all. This one was obviously thought up by a homosexual and plays as a silly metaphor for gay adolescents coming to terms with the sexuality. In this case our gay lead is bitten on the ass in a wrestling match by a werebear and becomes a carnivorous homosexual. The theory is that when a Werebear becomes aroused he kills members of the same sex rather then facing up to his own sexual needs. This one is basically a cross between Rebel Without A Cause and of course I Was A Teenage Werewolf but it also throws in elements of those 60's Beach Party flicks. I didn't enjoy this one for multiple reasons. Despite the fact that it was over bearingly gay and lacks female flesh it just wasn't funny. We get all these stupid Grease like song and dance numbers which really sucked any of the life out of it that it could have possibly had. Then we have this dip-shit with a Justin Beeber flip cut and fucking hell I hate those haircuts. I never liked A Nightmare On Elm Street Part 2 and all of its homo antics but imagine if they threw in silly songs. It could drive one to suicide. This one just sucks. 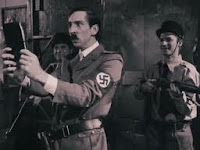 Next up we got The Diary Of Anne Frankenstein which I thought was a very funny and very witty title. This one also has its ups and downs. It plays like a cross between They Saved Hitlers Brain and Frankenstein but never has the balls to be a Nazisploitation movie, to ensure that nobody gets their p.c. little feelings hurt. Since this short film was created mainly by Jews they chose to go the complete and total comedy route which is very typical of boring fucking film makers in this wretched decade of shit. Its to bad to because I kind of liked this movie. The whole cast speaks in German with the exception of Hitler who does a rather convincing job of faking it until he throws a random and ridiculous line in. Hitler creates a monster to kill off all the Jews but it turns on him when he learns he was built with the bodies of other dead Jews. Its pretty funny but a bit to wimpy to be great.

Last we have Zom-B-Movie which links all of the short films together and shows modern day geeks hanging out in a drive-in theater while zombies go on a sex crazed killing spree. This segment is full of naked female flesh and offers up castration, eye violence, exploding heads, flesh eating, penis eating and a whole lot of 50's homage. The worst thing about this segment is a pussy-boy, horror-geek with a 311 T shirt on. It was a honor to watch somebody in a 311 shirt get killed. I just wish I could do it myself some day.

This one brings back that sick childish charm that Wad-Zilla offered up. I would say the best audience for this movie would be fans of Monsturd which I actually do like very much. Young horror-nerds who have not yet become overly jaded and judgemental would also probably like this movie but die-hard exploitation fans and lovers of 50's, 60's and 70's schlock are bound to get annoyed a bunch with the non stop use of computer graphics and embarrassingly modern shenanigans that unfold on the screen.

I am not about to throw this movie away or call it a complete waste of money and time but it could have been vastly improved with a little more love and dedication to the oldies. Worth a look for fan-boys who can take a joke.