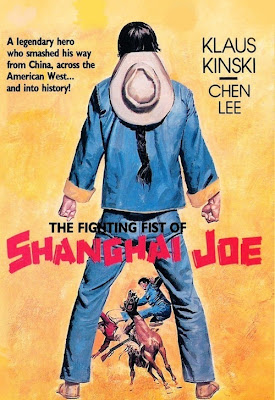 Ever wonder what it would be like if Bruce Lee came to America to fight Clint Eastwood in a Western movie? Of course not because it is a ridiculous idea. Ridiculous is the key with Shanghai Joe and while this film might not offer up the martial arts experience of Enter The Dragon or the stylish showdowns of The Good, The Bad And The Ugly it has enough camp value and off the wall mayhem to make for a very memorable cult film.

Shanghai Joe is a Kung Fu master who's greatest life ambition is to come to America and become a cowboy. I'm not one to piss on someone elses dreams but this seems like an awful idea and when Joe arrives in Texas it proves to be an awful idea.

As you would think the old west was probably not the most tolerant of places and times and when this Asian man shows up he is called just about every name in the book. Shanghai Joe is filled to its brim with racial slurs and various other forms of politically incorrect debauchery.

Basically what Joe learns upon his arrival is that Americans have no honor, no respect for others, no respect for human life. They cheat, steal and will find any way possible to stick a man from behind and try to fuck them over. Shanghai Joe does what he has to in order to survive and luckily for us this means being a bad-ass Kung Fu-ing son of a bitch. Shanghai Joe fights his way across Texas and along his way he will fight a cannibal, Klaus Kinski, a bull and various other gun-slinging tough guy types. As if Shanghai Joe doesn't already sound amazing, this one comes complete with lots of gore. We get the expected gun shot wounds but this one also offers up some eyeball gore, severed arms, a man is impaled on spikes, torsos are split open with bare fists and we even have some self surgery going on.

With all these insane shenanigans it is hard to even pick the most memorable scene. I would say its a toss up between the final showdown or the ridiculous fight between Shanghai Joe and a giant bull. Joe takes the giant bull out with a flying jump-kick to the achy-breaky skull. Watch this scene without laughing, I dare ya!

Shanghai Joe has to be one of the most insane Spaghetti Westerns in cinematic history. Gore galore, shoot-em-up chaos, martial arts and some very very bad acting.

If you are in the mood for a strange fistful of pasta check this one out! There is also a sequel to this which I am yet to see called The Return Of Shanghai Joe. 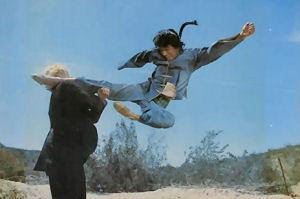