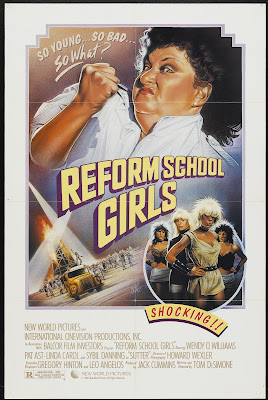 Not to be mistaken for the 50's movie of the same title Reform School Girls is a Women In Prison  movie done in Troma Studios fashion. This one is not actually from the Troma team but it seems like something they would have produced in the mid 80's.

Not that women in prison movies are known for their accuracy and realism but this one is pure camp. The girls walk around in lingerie and their hair & makeup is always perfect. That is of course with the exception of Plasmatics singer Wendy O. Williams. Wendy is a bad-ass bitch as one would expect. She plays Charlie, the women's prison baddie and leader. I don't think she wears pants at all in this movie. She spends the entire movie in bra & panties and comes complete with leather gloves and typical Wendy O. bracelets. In one of most raunchy moments we watch Wendy O. chew her food and spit it all over herself and the other girls as well. She also offers up a lot of the films violence and enjoys shooting guns at the guards and standing on top of a moving bus. Awesome!

Aside from Wendy O. Williams, Sybil Danning (Chained Heat, The Howling II) shows up as one of the wicked wardens but unfortunately doesn't offer up any bare breasted action. This is sad but not the end of the world because as I said this one is loaded with naked bimbos. Some of the other high points include a fat slob lesbo guard who enjoys punishing the Reform School Girls, killing kittens, burning things and going shotgun-crazy on a killing spree. In the films most disturbing moment we catch a glimpse up her dress. Yuck!

Reform School Girls is probably the most fun of all W.I.P. films. It is extremely fast paced. It never slows down or gets dull. Every couple of minutes there is another ridiculous spectacle going on.

This one is a prefect example of good campy fun from the 80's. It never crosses the line where it becomes embarrassing like many other genre films from this time. Its sleazy, funny, mean and sexy all at the same time.

Its a must see for W.I.P. fans or anyone who digs trashy cult films from the 80's. "You're just a shit stain on the panties of life"