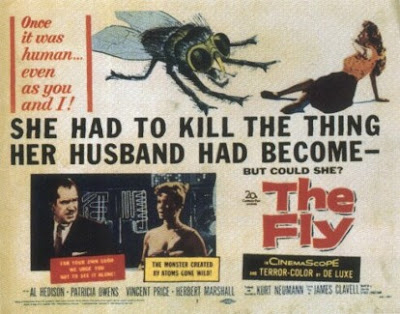 This classic monster movie from the 50's might not be the craziest in the genre but it stands on its own and differs from most. First off it was shot in color and deals more in back story and plot then the average monster romp would prefer to. Sure we get to see our half man half Fly monster but this one takes its sweet time and plays more like a mystery then an all out bug-man spectacle. 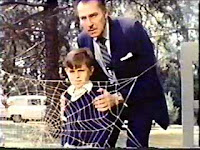 Another strange thing is that horror master Vincent Price appears in the film but not as the main character or the monster but instead as a supporting actor. Of course he would come back for the sequel Return Of The Fly in 1959 but this time around he just helps the story unravel.

While The Fly has a decent pace the order of events are more like something you would see in a Quentin Tarantino movie rather then a 50's monster flick. All of the good stuff is shown through flashbacks and we come to our shocking and downbeat climax rather abruptly.

Personally preferring the cheaper black and white Return Of The Fly over the original for the soul reason of more all out monster mayhem and more cheesy gags. The original is by far a more serious film. Or at least as serious as you can take a movie about a man with a flies head.

It tells of a scientist named Andre and his wife  who is forced to kill him after an experiment goes horribly wrong. Andre is "playing god" with his new invention of a teleporting machine. He runs a series of tests some of which being successful and others not so much. For example the family cat becomes lost in space when put into Andre's new machine. However things get really bad when Andre experiments on himself. He successfully telaports himself from one end of the room to the other but a fly must have gotten into the machine with him and the atoms of man and insect are combined giving us a silly monster flick. Thank you!

David Cronenberg would go on to remake The Fly in 1986 and it would become a huge success all over again. Cronenberg would take the classic monster movie in a complete different direction with new top of the line special effects and some very disturbing imagery.

While most would argue, I personally would prefer to watch the original trilogy over the Cronenberg remake and follow ups in the 80's. Check it out for scientists in executioner masks, a historical close up shot on a screaming woman, and an amazing final scene that has to be seen to be believed. "Help me!"

Email ThisBlogThis!Share to TwitterShare to FacebookShare to Pinterest
Labels: Fly (The), Monster Movies