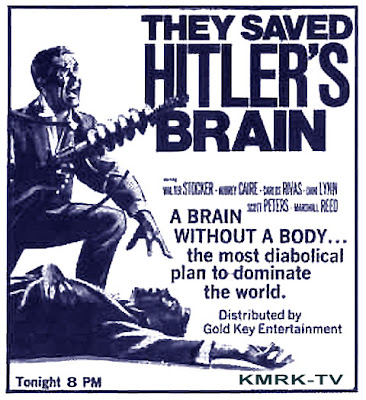 This crazy B-movie was originally released in 1963 as The Madman From Mandoras. About ten years later a couple of losers with a camera bought the rights to the film with the awful idea of turning it into a full length feature. The original film ran at 64 min. and it was probably the perfect run time for a campy scifi flick about a group of Nazi's who removes Hitlers head from his body and kept it in a jar with the plans of global domination.

The new owners of the once fun film shot a bunch of footage that obviously doesn't match up, causing the film to run at 91 minutes, which is painfully long for such a crap-fest. The new footage shows men with big 70's mustaches as secret agents continuing the search for a missing scientist. Then they threw in some car explosions and of course the cars don't match up either.

Although the new title may be much more memorable the film itself has been mangled by incompetent morons with no sense of the beauty of a camp film. Avoid They Saved Hitlers Brain at all costs and watch the original Madman Of Mandoras also known as The Amazing Mr. H and The Return Of Mr. H. You won't be let down by the silly 60's Nazi mayhem and the burning Hitler heads. 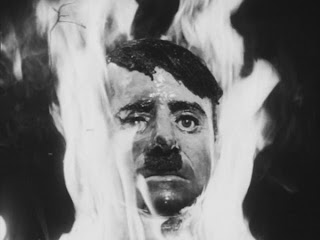 Email ThisBlogThis!Share to TwitterShare to FacebookShare to Pinterest
Labels: They Saved Hitlers Brain