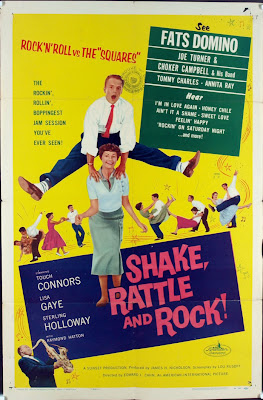 A group of old fashioned straight laced "squares" are outraged by the rock & roll craze and the affect it is having on the youth. They form a group to ban rock & roll but they won't take it down without a fight. This movie is clearly for the kids. The adults are bunch of bumbling retards and the kids are not harming anybody. This seems to be a theme that director Edward L. Cahn would use more then once. If you remember Invasion Of The Saucer Men the kids were the hero's in that one too and the older generation were portrayed as a bunch of ignorant morons. Although Shake, Rattle & Roll! is a comedy the theme of youth being right is so overly done that you have no choice to laugh. What the adults do not know in this one is that rock & roll took the kids off the streets, out of the gang wars and put them in the dance halls. These once Juvenile Delinquents now go to school and conduct constructive lives. "Some were even seen going to church" and its because they all share one common interest... Rock & Roll!
Some big name musicians appear and perform in the film. Big Joe Turner does a few numbers and Fats Domino really steals the show with a bunch of his hits. He does I'm In Love Again and Ain't It A Shame and of course the kids go wild but when the parents crash the kids party these straight laced rock & rollers turn delinquents again and cause a riot.
The downfall to this movie for me was a character who goes by the name of Axe. He is so over the top with his annoying 50's street jargon "What are you supposed to be? I'm a hipster!" and his bad comedy act that the entire film would have benefited from his total nonexistence. On the other hand we get an awesome old man played by Raymond Hatton who was also in Invasion Of The Saucer Men. Well this time around he hates his wife and just wants to rock & roll! Hatton was my favorite part of this film aside from Fats Domino and Shake, Rattle & Roll! is worth a watch for his old man antics alone.

So grab your switchblade and carve into a police car to the boppin beat of Fats Domino, Big Joe Turner and Shake Rattle & Roll! 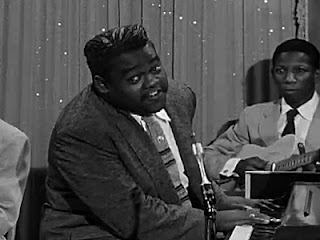