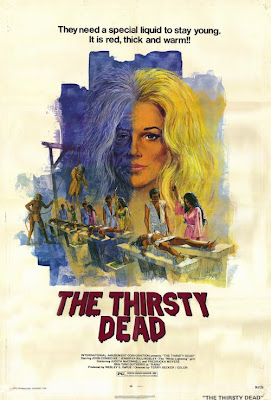 Four girls are abducted by some dudes in monk get-ups and are brought to a cavern in a (Philippines) jungle where they will be dressed in Toga's and meet a cat in a white one piece jump suit with a huge popped collar that would make Elvis jealous. 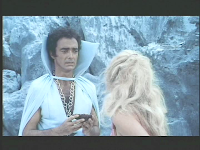 The Richard Simmons/Elvis impersonator is a member of a blood drinking cult of immortals. Sure they drink blood but they aren't really vampires or at least in the normal sense of vampires. Instead they sacrifice the undesirables by draining the blood from their bodies over long periods of time. The captive women eventually start to look like zombies and when they are finally fully drained they are thrown into a pit to rot away. However our Elvis impersonator falls in love with one of our Toga wearing women and before you can say Love Me Tender she manipulates the little worm into helping her and her friends escape.
The Thirsty Dead is virtually gore-less with the exception of some rotting corpses and the slightest bit of red stuff from a knife to the throat but the knife doesn't do any damage. It might as well have been paper cuts because they just nick the girls throats. The lack of gore is not much of a surprise considering the director has never really done anything except for television work. Apparently this movie used to get a lot of t.v. screen time as well and I suppose it may have been an okay time passer for a t.v. movie but its pretty much a total waste of time to watch it on your own and certainly not worth owning.