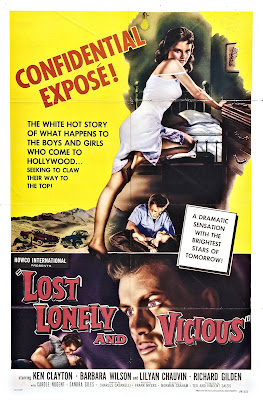 This has to be one of the weirdest movies to cash in on the success of Rebel Without A Cause. Lost, Lonely And Vicious tells the tale of Johnnie Dennis a new, young talented actor in Hollywood. On the surface it seems he has everything going for him but does he really? 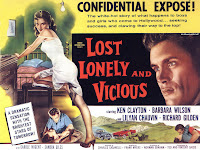 Johnnie has an obsession with death. He runs with a bunch of Juvenile Delinquents, drag races his car in the street and almost runs down pretty young girls like Barbara Wilson (Flesh Eaters) and gets into violent street fights. Its not long before Johnnie realizes he has a "Death Wish" and he is off to the library like a true rebel to do some research on his obsession. He learns that he is not the only one who dreams of being dead and his matters get worse causing him to become more self destructive then ever.

Johnnie eventually falls in love with Barbara Wilson but will love be enough to keep Johnnie Dennis from taking the final plunge? Will he die in a rumble, or a drag race? Will he just commit suicide? He seems destined for destruction and Lost Lonely And Vicious is a pretty morbid love story from the 50's. Sure its cheesy as hell but its still a nice change of pace from the average juvenile delinquent flick.

We get rockabilly dancing girls in tight sweaters, a pretty brutal street fight with heads being smashed with hammers, wrenches, concrete and car doors, reckless driving in big 50's thunderbirds, and it also sports what may be my new fetish. A fetish that only Ed Wood Jr. would understand... Girls in tight sweaters spinning their favorite 45's between their cleavage. It's a moment that has to be seen and possibly makes the movie worth owning.