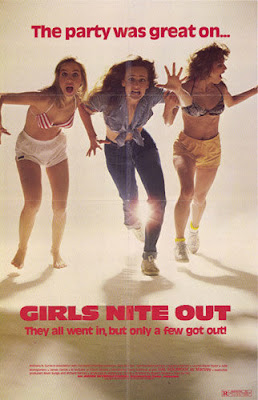 This movie poster certainly doesn't serve any justice to this 80's Slasher flick. We have a demented killer named Dicky and college kids are being knocked off one by one by a sicko in a bears suit all while 60's pop music which I doubt anybody had the rights to use plays as our soundtrack.

Hal Holbrook who I always remember best for his role as Henry in Creepshow (1983) plays a security guard on college campus who's daughter was brutally murdered by a madman named Dicky. Years later blood is spilled again on school grounds and Holbrook does his best to protect the students against a maniac running around in the basketball mascot bear suit. The suit is complete with a set of serrated knife used as claws on the bear suits paw. Naturally (Freddy) A Nightmare On Elm Street pops into mind and its pretty interesting to look at considering the two movies came out the same year. Who was the first to use the knives for finger nails, I am not sure but Girls Nite Out is by far the weirder of the two films.

Unfortunately this one isn't overly gory. We get some throat slashing but that's really it. Another problem with Girls Nite Out is the lack of female flesh. We have tons of guys running around topless but we don't even get a bit of tit. For this reason I couldn't help but be reminded of the incredibly homoerotic A Nightmare On Elm Street Part 2. Despite the lack of nudity and splatter, Girls Nite Out is still a fun Slash-em-to-shreds campus grounds massacre flick similar to movies like Happy Birthday To Me and Graduation Day. The only difference is this time the killer is a silly looking bear and that's just ridiculous. True Slasher fans should not be disappointed. 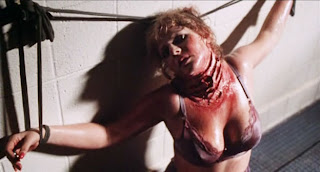