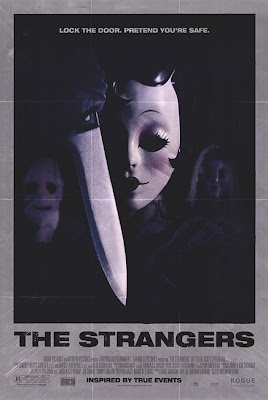 When I first saw the trailers for this thing I avoided it at all costs and despite the occasional positive recommendation from a few reliable resorces I still avoided The Strangers like the plague. After all the masks looked fucking silly and it stars Liv Tyler who has never had any appeal to me unless if she planned on being naked and the other star is that loser from those shitty c.g.i. Underworld flicks. Basically The Strangers sounded like fucking torture.

Well lets just say curiosity didn't quite kill the cat, it just left him in a state of confusion. I have very mixed feelings about this movie. It starts off with a bang. The tension builds and builds and it plays like a old time hunting's & ghost flick like House On Haunted Hill (1959) or something. Noises are very effectively used to keep the viewer at the edge of their seat. The tension builds so high that you just know its going to turn out to be an amazing movie. The Strangers appears to be one of the only horror films that remembered the whole point is to scare the audience and then out of no where the movie takes a drastic turn for the worse. Strangers turns out to be no more then just another modern home invasion movie and nothing is explained. I suppose some out there might like the movie for this reason by I personally was annoyed and extremely let down. The movie went from very subtle and creepy scares to silly masked characters who taunt a young couple. There is not enough characters in the movie for a decent body count and when it was all finished The Strangers is nothing more then another forgettable disappointment. I don't think I will be watching Strangers 2 any time soon. 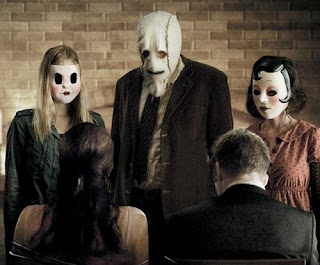