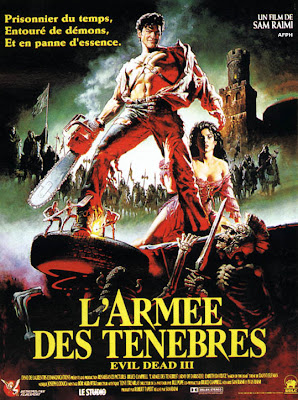 Army Of Darkness is the third film in the Evil Dead trilogy and its the most ridiculous out of the lot. It continues from the end of Evil Dead 2 with Ash being sucked into a sort of time warp. He ends up in medieval times where he will fight the army of the dead. One of the alternate titles for the film was The Medieval Dead which I thought was pretty witty.

Evil Dead 3 or Army Of Darkness was released 1992 and we all know that the 90's was an awful time for American film in general and horror movies were the bottom of the barrel. Nobody wanted to offend anybody and the cruel, nastiness of the 70's were long gone and the Splatter Flicks of the 80's seemed to be a passed trend as well. Evil Dead (1981) was a campy gore flick and still managed to be creepy at the same time. Evil Dead 2 (Dead By Dawn) (1987) exploited the camp of the first film to the max and gave us an all out horror,comedy, splatter-fest. This time around the movie becomes so overly silly that it can hardly even be considered a horror flick. However the same year as Army Of Darkness another Splatter pioneer,(Peter Jackson) came out with Dead Alive a.k.a. Brain Dead and unlike Raimi, Jackson gave the Evil Dead fans what they really deserved. The two films can't even be compared other then the fact that they both were released in 1992 and their both more silly than a shit filled hat. Dead Alive is one of the goriest movies ever made and still manages to be funny (even funnier then Army Of Darkness) while the final film in the Evil Dead trilogy really only appeals to kids and those of us who grew up with it.

Bruce Campbell of course continues his role as Ash and he really goes above and beyond as far as beating himself up for the movie. He delivers tons of memorable lines "Good... Bad... I'm the guy with the gun", does many of his own stunts and makes some really ridiculous faces while doing it all. I'll admit the special effects were cool and the film is a whole lot of fun. Its just disappointing that Sam Raimi didn't push for some more gore.

Either way now Mr. Raimi and Mr. Jackson are both in the same boat, making shitty Hollywood movies and fist over dollar. Lord Of The Rings might appeal to some but I miss the Bad Taste days. 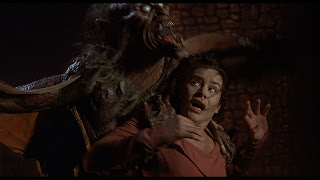