Usually not being interested in Vampire Flicks I took my sweet time getting around to this one. I have to admit I was quite surprised. This Swedish tale takes the blood-sucker genre in a totally different direction in the sense that it focuses on children.
Oskar is a twelve year old boy who is being bullied in school. He remains passive and takes his beatings but fantasizes about getting even with his fellow students who torment him. Oskar collects news clippings from local murders and follows the serial killings that is going on in his neighborhood. He also stabs trees with his survival knife and imagines it to be a squirming classmate. It is quite obvious that Oskar's future doesn't look so bright and anyone who was ever pushed around in school can probably relate with young Oskar.

The young boys life takes a drastic turn when he meets his first love, a 12 year old vampire named Elly. Together the young couple explore love, hate, pain and happiness through friendship.

Some of the more memorable moments involve bodies being strung up from their ankles in true Ed Gein fashion and drained of blood with throat slashing, Teenage boy decapitation, Teenage boy arm dismemberment in swimming pool. An older vampire pours acid on his head and jumps from a tall building leaving a disfigured corpse. We also have ear mutilation by giant stick and a woman who bursts into flames in her hospital bed. However the weirdest part in the movie for me is when our young vampire exposes herself and reveals that Vampires don't have any genitals. This left me scratching my head and wondering why the Swedish filmmaker took the film in this direction. I still don't understand why Vampires don't have any sex organs.

Let The Right One In sets a sad, depressing tone from the opening credits to the films final and it is as far from anything that American film goers are used to seeing. Of course America got its hands on the title recently and did our own version which I am yet to see but I highly doubt it has the smallest bit of the Swedish versions originality. Check this one out with your guy or your girl. Its a interesting look at disturbed adolescents and the journey to adulthood with some Vampiric folklore thrown in for good measures. 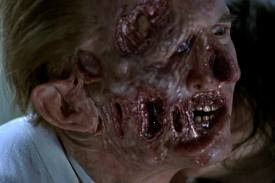 Email ThisBlogThis!Share to TwitterShare to FacebookShare to Pinterest
Labels: Let The Right One In, Vampires