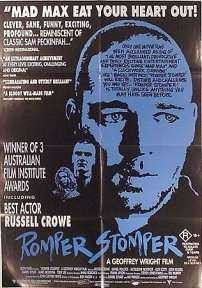 This is the only Russell Crowe film as far as I'm concerned. Everything he has done before or since pales in comparison. He plays Hando the leader of a Nazi Skinhead gang who goes to war with the Chinese in a heavily Asian populated area of Australia.

The wardrobe was excellent in this movie and so was the acting style of these young hooligans. They portray the European Skinhead almost perfectly and unlike the cheesy American mainstream movies that deal in the same subject you can really see that some research went into the film before shooting began. Aside from the authenticity of it all Romper Stomper is one hell of a entertaining movie with very violent gang fights and some very chilling and convincing acting at the same time.
Some how audiences got this thing wrong. Romper Stomper clearly doesn't glorify the white power movement. Anyone who chooses to side with these racial villains opted to that on their own because the movie never portrays these cropped haired boot boys in a positive light. Whatever your political stance be, if extreme cinema is your thing then this movie should appeal to you. Some of the highlights are of course violent street fights, a father and daughter incestuous relationship, an awesome soundtrack, nunchuck wielding skinheads, finger breaking, a young boy is shot and killed by the police, sexist rantings, strangulation and a bloody stabbing.
So skip the boring trad-skin flicks like This Is England and definitely throw away your shitty Hollywood skin-flicks like American History X and check out the king of em all Romper Stomper... Its as fun as a boot to the guts. "We came to wreck everything and ruin your life. God sent us!" 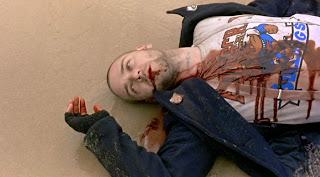