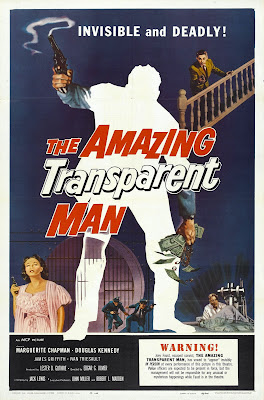 Almost 30 years later this low budget scifi flick cashes in on The Invisible Man (1933) and takes it in a whole new direction. It starts off with a bad-ass jail break scene with our anti-hero dodging bullets and spot lights from the police who are on his tail. He gets away with the help of a woman who is waiting for him on a bridge.

In my opinion most men would do some pretty evil shit if they had the power to become invisible but our hot headed criminal gets a little to excited at the thought of being able to pull off any kind of "job" or just get away with his criminal behaviour. Nobody really works with anybody else and since the movie really doesn't have any good guys, its pretty hard to see where its all going to go. Well it doesn't really go anywhere. We get a couple of fist fights, some invisibility special effects and all the nonsense that goes along with it, a little bit of gun violence and the whole thing ends at 57 minutes with an explosion. Talk about irrupt endings... The truth is The Amazing Transparent Man becomes nothing more then a let down and the original Invisible Man is a much better watch. 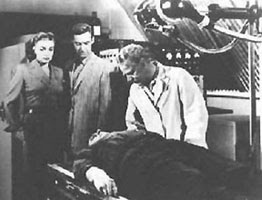