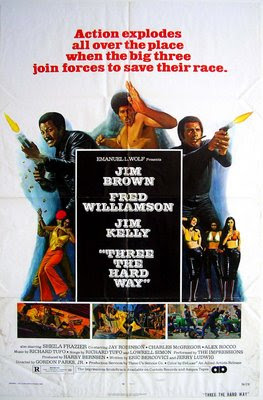 Its kind of hard to believe they could mess this one up. Instead of one we get three of the genre icons. Jim (Slaughter) Brown's girlfriend is kidnapped by a white fascist group whom plots a genocide against the black man. Jim Brown teams up with Jim Kelly (Black Belt Jones) and Fred Williamson from movies like Black Caesar, Legend Of Niger Charlie and Hell Up In Harlem. The three blaxploitation super stars go to war with the white fascists and get Jim Brown's woman back.

The plot is ridiculous and the action scenes are all pretty lame. The movie doesn't even get slightly entertaining until Jim The Dragon Kelly shows up and kicks a bunch of cops ass in a pretty amazing kung fu scene. Kelly blurts out his usual weird keeyah's and refuses to use a gun. Williamson and Brown's characters are both pretty lame and the shoot-em-up scenes get boring and repetitive pretty fast. Three The Hard Way was directed by the same cat who did Super Fly but really lacks in every department. Skip this one and take home Five The Hard Way also know as Sidehackers staring the great Ross Hagen. 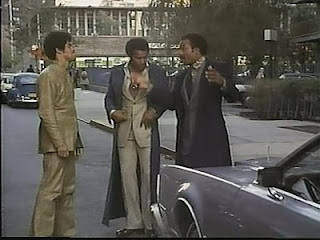