The Gorilla is more of a comedy and less of a horror movie. Its more of a mystery then a thriller and its more of a Ritz Brothers movie then a Bela Lagosi movie. I have never heard of or seen the Ritz Brothers until this movie but I think I have a pretty good feel for who they are and how they act.
They are pretty silly guys and I personally find them funny but they over do their Abbot And Costello routine a bit to much. Or at least they do in The Gorilla. 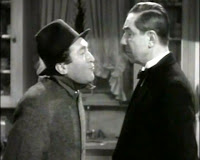 Bela Lagosi plays a butler with some crazy Kung Fu moves. Okay maybe they are not so crazy but he does know some martial arts and uses them on the Ritz Brothers. Unfortunately Lagosi doesn't have all that much screen time because the film is using him as a red herring. They want us to believe that Lagosi is the killer known as The Gorilla. Of course in the end Lagosi turns out to be a good guy with some creepy mannerism's.
On the other hand The Gorilla does have a guy running around in a giant ape suit and these movies although never really good still appeal me. We have this one really cool scene where the killer Gorilla dangles a woman by her arm from a roof top. The Gorilla hates females and we know this because we are told over and over again. Another thing that I find completely ridiculous about this one is that the characters think the Gorilla can read and write. The Gorilla is supposed to be sending death threats through written letters and that's one of the dumbest things I have ever heard. If ya like dumb, The Gorilla might be a decent pass time but if watching another duo mimic Abbot and Costello might piss you off then stay far away. 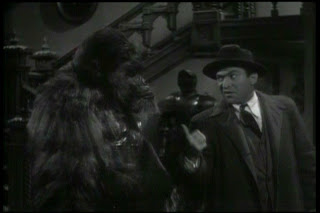 Email ThisBlogThis!Share to TwitterShare to FacebookShare to Pinterest
Labels: Gorilla (The), Gorilla's, Mystery