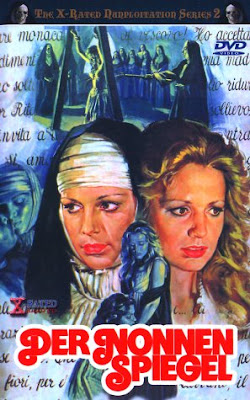 Diary Of A Nun also known as Diary Of A Cloistered Nun, Unholy Convent and many more is the tale of a girl with an arranged marriage from birth who falls in love with another man. When she refuses to marry, her father sends her off to a nunnery. "If you don't want your daughter to be completely destroyed, get her to a nunnery."

Once inside the convent, things will only get worse for the young nun. First her worldly possessions are taken from her. Next she is stripped and eye-balled by perverted nuns. Then she is locked in a concrete room for 30 days, where she is on the brink of insanity. Inside her concrete cell she is fed beans and water once a day, except on Fridays. Fridays are a day of absence. She is also given a bucket for body fluids and is allowed to wash but under no circumstances is she allowed to speak with her sisters until her 30 days are up. Well the young nun makes it through her trial period without killing herself but that might have been her biggest mistake. From here on she is subjected to perversion, torture and religious madness. Her lover is eventually killed and her father along with the rest of her family disowned her. She is eventually impregnated and banished from the convent.
Diary Of A Closeted Nun is one hell of a depressing movie but its surprisingly clean for a film in the nunsploitation genre. Apparently its based on a true story, which I'm not so sure I believe (After all this is an exploitation flick). We do get a bit of blood but not much at all. One man has his face slashed and another is stabbed in the guts. Then we have a whipping scene and a drowned nun. Diary Of A Closeted Nun does offer up a decent amount of bare flesh but the real shocker of this film is the down trodden path this poor girl is forced to walk.
Fans of ultra trashy Nunsploitation flicks like The Killer Nun will probably be disappointed with this one but anyone who is willing to give it a try might be surprised. Its actually an example of a nun film with some real emotion behind it and a touch of sleaze for good measures. I couldn't help but be reminded of the work of Tinto Brass while watching this one. 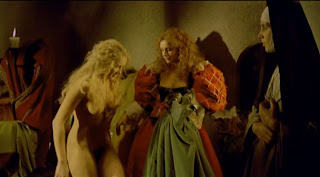 Email ThisBlogThis!Share to TwitterShare to FacebookShare to Pinterest
Labels: Diary Of A Cloistered Nun, Diary Of A Closeted Nun, Nunsploitation, Unholy Convent