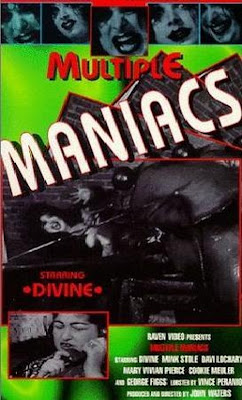 Multilple Maniacs is perhaps the most punk rock movie ever made and is amongst my personal favorite John Waters films. Its right up there with Pink Flamingos. Its just as filthy and seems a little more on the artsy side at the same time. Of course Multiple Maniacs blew its chunks across art-house screens a good four or so years before the punk explosion but it is the attitude of the nihilistic punk rockers to come that takes form in this brilliant piece of disgust-o-rama.

Divine is a psychopath who runs a freak show called Lady Divines Cavalcade Of Perversions. At this show locals gather together to watch "Queers" kiss each other, girls lick bicycle seats, Junkies go into convulsions from withdrawal, and a man eat his own vomit.

I know this sounds like quite the show but what the viewers do not know is that when they make it to the main attraction and are about to see Lady Divine herself, they will be tied up and have their "Cash, jewelry, furs and narcotics" stolen. Then the traveling freak show of criminals will move to the next city.
Throughout the film Divine sinks further and further into depravity until the end where he/she runs through city streets (Wearing some very ugly lingerie) killing people.
Multiple Maniacs is truly 90 minutes of filth and we get all kinds of sick, trashy happenings. One of the most memorable scenes takes place in a church between Divine and Mink Stole. Divine gets down on the pew while Mink gives her a "rosary job". Yes you guessed it, rosary beads are being used as anal beads. Multiple Maniacs is completely blasphemous with long rantings about Jesus the pope and the catholic church and all of the "Divine" spirit that comes with it. We also get to see Jesus being tortured, spat on and eventually crucified. We have a little boy dressed as the pope as he walks the streets with Divine in drag.
The film also offers up some nasty slash-em-up scenes that were obviously inspired by the Manson Family murders. There is a really nasty cannibalism scene where Divine eats raw meat and tries to look away from the camera every time she is gonna puke. We also get a crazy moment where Divine is raped by a bearded tranny in a dress and a butch woman. Divine (of course) loves it. There is cop killing, lots of witty foul language and before the film is over we get a huge monster. A giant lobster monster shows up after Divine goes ape shit and kills everyone in the room. The monster then rapes Divine.
Anybody who likes Pink Flamingos, Female Trouble, Desperate Living or any of John Waters other trashy films will love this movie. Its also one of his earliest. It is the first "Talkie" that Waters has ever done and it is well worth the watch. Just make sure to grab yourself a Brillo pad because after watching Multiple Maniacs youre gonna need it to scrub the filth off. 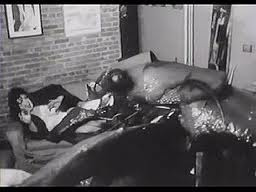